The Californian Kingsnake. By Ultimate Exotics 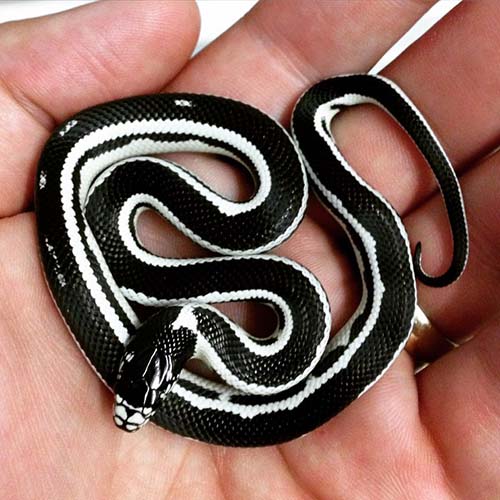 Californian Kingsnakes have smooth, shiny un-keeled scales with a head that is barely being wider than their neck. Most Californian Kingsnakes have dark brown bands with a light yellow color in between. There are a lot of variations and in the wild and captivity there is a phase known as the desert phase where the bands are pitch black with a snow white color in between.

In captivity this phase has been selectively bred so that the white in between the black bands has increased almost making it 50% black and 50% white. There is also a high yellow variation where the light yellow color in between has been selectively bred to form a bright yellow color in between the brown bands. The bands of the Californian Kingsnake can also vary and can be striped, abhorrent (striped and banded), spotted and speckled. Californian Kingsnakes are easy to work with because they tolerate handling quite well, but it’s always best to not over do it. As yearlings they tend to be a bit jumpy but as they  get older they seem to calm down. When a Californian Kingsnake feels threatened it will often shake it’s tail causing it to vibrate and hit against their surrounding substrate such as leaves and wood shavings, thus making a rattling sound. Another line of defense is that they will excrete a white substance filled with uric acid which has a sharp smell and a very bitter taste for any predator trying to eat them.

Distribution
The Californian Kingsnake ranges from the south western to the western United States, but is mainly found in California, hence the name. They are mostly found in desert areas but also live in many other places such as forests, farmlands, rocky out crops and riversides.

Housing
Housing Californian Kingsnakes is fairly straight forward. There are a large variety of cages on the market today that will comfortably house a Californian Kingsnake. For example there are glass fish tanks with custom made lids with wire gauze which allow sufficient ventilation. This setup is nice as it allows you to view the snake through the glass. Another cage is a display cage made from wood that has glass sliding doors in front and wire gauze for ventilation on the sides. This is ideal for a display cage in a house as the glass doors in front allow you to view the inside of the cage. A more basic setup which is efficient and takes up little space, especially if you planning on keeping a few snakes, is a rack system where plastic tubs of appropriate sizes are used. When using a rack system make sure to drill enough holes in the tub to allow your snake enough ventilation. Whatever cage you decide to use make sure it is the appropriate size for your snake. A good rule of size for a Californian Kingsnake’s cage is to try make the cage as long as the snake and as wide as half the length of the snake. A little bit smaller or a little bit bigger is also fine. Height of the enclosure isn’t much of an issue as these snakes are terrestrial (ground dwelling). One very important rule when housing Californian Kingsnakes is that they must be housed individually! If housed with another snake, even another Californian Kingsnake, they will most definitely eat it. They are cannibalistic and in the wild eat other snakes, even Rattle Snakes! The only time when one would put two Californian Kingsnakes together is when they are sexually mature and have experienced pre-breeding conditions (ie. hibernation). Even at this time, however you should not leave them together unsupervised for more than a few hours.

All Californian Kingsnakes will require heat to eat, grow and thrive in their enclosure. An easy and effective way of providing heat is by placing a heating pad under one side of the enclosure. This provides a temperature gradient so that the snake may choose the temperature where it feels most comfortable. A good temperature on the warm side is about 29 ̊C and the cooler side about 26 ̊C. If your temperature is not digitally controlled it is best to make sure a thermometer is placed on the warm side of the enclosure to allow you to monitor the temperature. This will allow you to make sure the temperature doesn’t get too hot (above 34 ̊C). If it does, for example on a hot day, it is best to switch off your heating pad and lights, if you have. 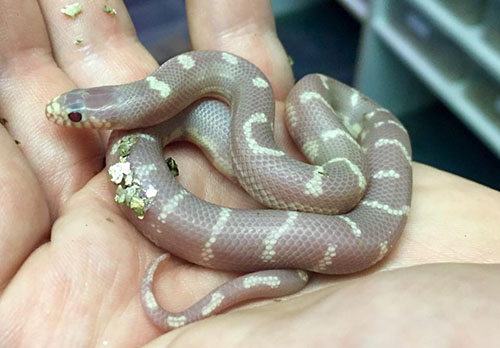 Bred by Rolf Dennison, this was the first Blue-eyed Blonde Californian Kingsnake bred in South Africa.

Feeding
In the wild Californian Kingsnakes eat a large variety of prey. This includes rodents, snakes (including venomous species), birds, lizards and frogs. In captivity the best food to feed is mice, as they are easy to breed, inexpensive and are easy to purchase at your local pet shop. Hatchlings will eat pinkies after their first shed which usually occurs about 7 days after they have hatched. Food will need to be offered about once a week, although some snakes can be fed about twice a week when they are growing. Adult Californian Kingsnakes can be fed an adult mouse once a week, some will even prefer small baby rats. Uneaten prey must not be left unattended as this will cause stress to the snake and sometimes the mice or rats will actually attack and kill the snake.

Breeding Basics
The first thing when it comes to breeding Californian Kingsnakes is you have to have a sexually mature
pair. Californian Kingnakes will need a cooler period of about two months when they will hibernate before breeding. This will help to stimulate breeding activity and will result in a much higher success rate.
Two months before hibernation I like to feed my Californian Kingsnakes a little bit extra as it is important to ensure that your snakes are in good condition before their hibernation. Females need the extra weight as they will need it to produce eggs. With males extra weight isn’t so important, but they must be in good condition as some males will not accept food during the breeding season and sometimes won’t eat for a few months.
Two weeks before hibernation it is important to stop feeding to allow their guts to be empty before they go into the cooler period. This is important because as the snake goes into hibernation as their metabolic rate will slow down and instead of the food being passed through the gut easily, it will ferment and rot in the snake’s gut and could possibly kill it. As winter approaches and the night time temperature begins to get cooler I turn all the heat off and over a couple of days slowly start to drop the temperature until it reaches anywhere between 13-18 ̊C. At this time I try and keep them as dark as possible and disturb them as little as possible. All that you need to do is make sure is that there is always clean water in the cage. During this cooler period their metabolism slows down considerably and food should not be offered. Every ten days or so I like to just check that the snakes are okay, being careful not to disturb them too much. 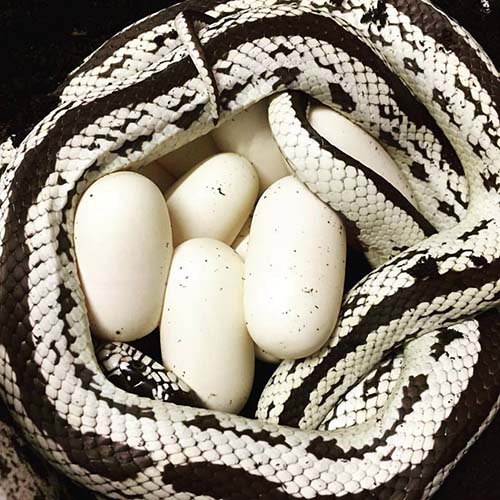 After about 2 to 3 months of cooling you can start to slowly raise the temperature until it is back to normal. After a week of this, feeding may resume. Two to three weeks later mating should begin. I also find it best to introduce the female into the male’s cage, as the females seem to be a bit more protective and aggressive. If all is good mating should begin shortly. It is always a good idea to keep an eye out, but don’t disturb them too much. After about an hour or two, remove the female and in four days time you can repeat the process. It is best to try and mate them a few times, as this increases the chances of fertility.

Once they have copulated and mated successfully it takes about 60-70 days for the eggs to develop
and be laid. If the eggs are incubated at 29 ̊C it will usually take them 60-70 days to hatch. Californian Kingsnake clutch sizes can vary from 4-13 eggs and in some cases even more, but the average size is about 11 or so eggs. 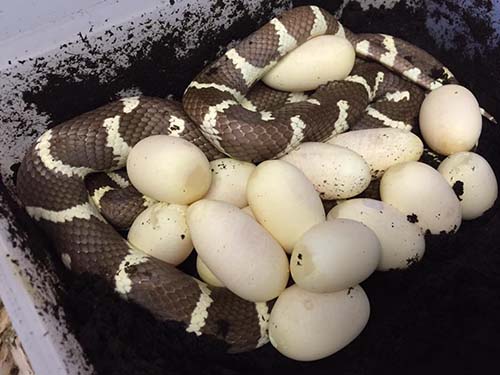 The largest clutch we have ever had from a Californian Kingsnake. 15 large eggs!

Once the babies have hatched, they should be separated into smaller individual containers, and after about a week or so, they should have their first shed and then should be ready to eat and grow.Overall the Californian Kingsnake is a great snake, one that I have always enjoyed keeping. If looked after, your Californian Kingsnake will do very well in captivity an will make and exciting new pet for any person keen on keeping reptiles.