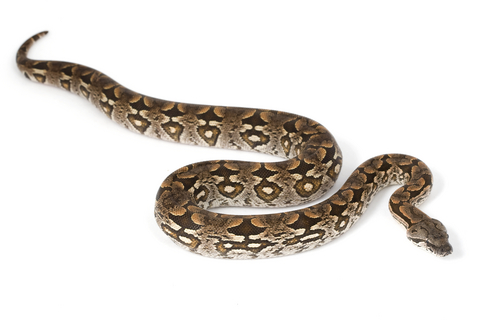 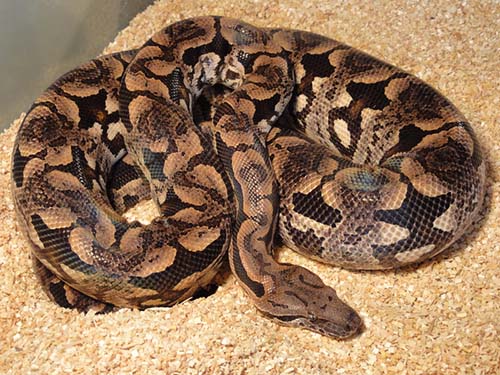 The Dumeril’s boa has gained popularity amongst reptile keepers due to their calm temperament as well as their relatively small size, which averages around the 1.2 – 1.8 meter mark with the largest reported being 2.5 meters.

The habitat region of the Dumeril’s boa is the south/ south west portion of Madagascar as well as on Reunion Island. This snake is listed as CITES (Convention on International Trade in Endangered Species of Wild Fauna and Flora) Appendix I, which means that it is threatened with extinction and CITES prohibits international trade of this reptile except when the purpose of the import is not commercial (for example for scientific research). This species is threatened by deforestation as well as human persecution. In some areas it is feared and often killed on site, while in others it is respected and left alone.

They were once exported from Madagascar in great numbers. They are, however, quite prolific in captivity nowadays, and captive bred animals are relatively inexpensive and easy to find in the exotic pet trade. They have a typically docile nature, and readily feed on rats.

The markings of the Dumeril’s boa are intricate and difficult to describe. They are generally a mottled pattern of browns, tans and blacks, and this provides camouflage when they are lying in leaf litter in the wild. Particularly attractive specimens exhibit large amounts of pink or copper colouration. The juveniles in this species are tinged with pink, orange and crimson and are among the prettiest of any boa species.

Dumeril’s boas do well in captivity, so in this article I will be covering all relevant aspects of keeping Dumeril’s boas, from caging through to breeding.

Dumeril’s are ferocious feeders; they accept mice and rats with equal enthusiasm. The young, however, can be nervous and should be given secluded accommodation if they show any inclination to refuse food. Feeding baby neonates hopper mice at night time, improves the chances of them eating the first meal given.

Dumeril’s boas are relatively large, heavy-bodied, ground dwellers although they are not as bulky as, for instance, most common boas. Dumeril’s boas require similar conditions to that of the common boa but, as it is a smaller snake, its cage need not be quite as large (1.2m x 0.6m). As with other boas, Dumeril’s boas do not need vertical height as they do not have a tendency to climb and items such as branches and shelves are probably unnecessary. Dumeril’s boas do, however, like to hide and a hide-box of appropriate size should be provided. 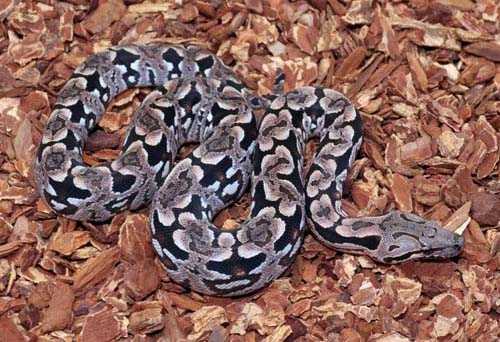 Dumeril’s boas come from a rather tropical area, so they require high temperatures. The temperature in their cage on the hot spot should be sitting at 35°C and the ambient temperature at 27°C. Any temperature lower than 26°C on the hot spot, and there is a chance that the snake could develop an upper respiratory infection.

Dumeril’s boas are notorious for defecating in their water bowls. The best preventative measure one can take with regards to this would be to give them a smaller water bowl so that they will not be inclined to venture into their water bowls. One must always, however, keep this topped up as they drink a large amount of water.

Because Dumeril’s boas come from a tropical area, their accommodation should have a relatively high humidity level of between 60% and 80% humidity. This can be achieved by misting the cage every morning. This humidity level will also help the snake when it is shedding its skin.

Although these snakes were formerly regarded as difficult to breed, this has changed in the past few years. They are now considered easy to breed, with a gestation period of approximately 7 months.

Dumeril’s boas reach sexual maturity within 3 to 5 years of age. Breeding usually starts by dropping the temperatures in autumn/winter (so from May in South Africa). The day time temperatures should remain the same but the temperature at night time should drop by 2-3°C. I normally place the male together with the female in June as by this time the snakes have been “conditioned” to the winter temperatures. Courtship usually happens within an hour or two of introduction and the pair can stay locked together for hours on end. During this time it is important to keep feeding the snakes, if they ever give you a chance

to do so when they are not mating. At this time the male normally goes off the feed whereas the female starts eating you out of house and home. At the end of July one should return the night time temperature to normal. The snakes may carry on mating until ovulation occurs in the female; this takes place between August and October. After ovulation has happened the male will generally stop showing signs of interest in the female. At this time you should remove the male. Females are ovoviviparous (they give birth to live young); the babies are normally born between early January and late March. The litters seldom exceed 20 neonates; litters of 6-12 neonates are more common. Newborn neonates are about 20-40cm in length.

In recent years, there have been a few mutations that have appeared on the scene, but a lot of them were a result of temperature changes during the development of the neonates. There is, however, one that has proven to be genetic and that is caramel albino. This is a pure Dumeril’s boa and no hybridization was involved. It has proven to be a recessive gene. It is a truly stunning animal to behold. I can see this mutation becoming a firm favourite among Dumeril’s boa enthusiasts.

If you would like a relatively large boa, yet are daunted by the thought of owning a 2-3m snake, I would highly recommend the Dumeril’s boa as an option out of the larger boa constrictors.