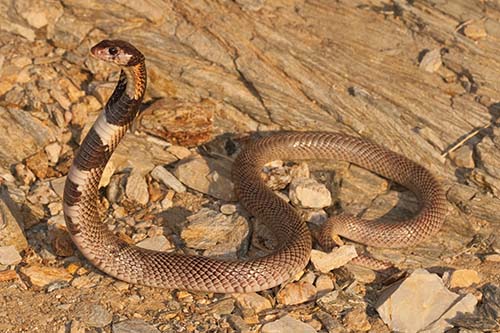 It was thought that a third sub-species existed, the Western Coral Cobra (Aspidelaps lubricus infuscatus), but as of recently A. I. infuscatus and A. I. cowlesi have been classified as a single species. Their colours and patterning can vary greatly depending on the different subspecies. Some of the Coral Cobras have the most striking colours; with their smooth shiny scales, bright orange to tangerine background colour and black bands this snake is very appealing. Some may also have an orange-yellow background colour with black specks fading into this colour. Through the years breeders have been selecting Coral Cobras for their colouration and this has resulted in some beautiful animals with clean bands and brilliant colours. I also know of some South African breeders who have specimens with reduced bands, leaving black-like spots on a bright orange background. Besides the Coral Cobra’s striking tiger-like colours and patterns, this snake is fairly small and therefore easy to house and work with. The Coral Cobra rarely reaches sizes larger than 75cm, with most adults averaging around 30 – 60cm. 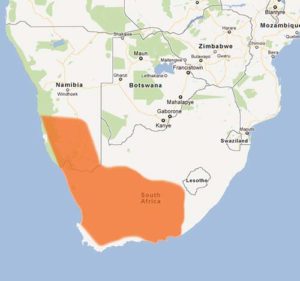 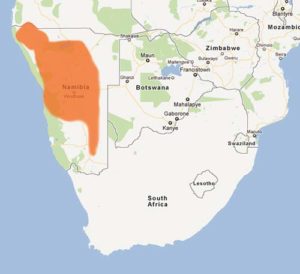 As you will notice, Coral Cobras have a large rostral shield (scale on the front of their nose) which they will use for burrowing in their sandy and stony environment. The Coral Cobra will spend much of its time underground, only emerging at night to forage for food. In its natural habitat these snakes will feed on small lizards, snakes, and rodents. In captivity they will accept pre-killed mice.

Coral Cobras make up for their small size with their attitude. These are fierce little snakes and it doesn’t take much to upset them. They are quick to start hissing and flicking around the cage, especially when they are young. When threatened they will raise the front part of their bodies and may spread a narrow hood in a cobra-like fashion while hissing and striking repeatedly.  They do this with such intent and fierceness it is comical to watch! I find that they calm down as they get older and as they get used to your movement during cleaning time etc, but even though they may appear calm don’t take any chances! Although these snakes are small they are still venomous and should not be kept by anyone who is not experienced in keeping venomous snakes. Coral Cobras have neurotoxic venom. In South Africa, bites from Coral Cobras have not resulted in life threatening symptoms. Whatever the case, do not get bitten: each person can have a different reaction to venom.

Another important thing to remember is that Coral Cobras are indigenous to Southern Africa. This means that to keep these snakes in some provinces in S.A you will require a permit. Check with your local authorities or parks’ board to find out if you can keep these snakes where you live and what permits are required, if any.

Coral Cobras can be housed in a variety of different enclosures. I would recommend housing these snakes individually and only placing them together at mating season. This will ensure that there is no chance of your snakes eating one another, which is rare but can happen. It will also make feeding much easier and there will be less stress for the snake, as these snakes do not live together in the wild. I also find that when it comes time to breed and you place the female with the male, it is very stimulating for the male as he makes contact with the female for the first time that year.

When it comes to housing Coral Cobras there are a few factors we have to keep in mind:

As mentioned, in the wild Coral Cobras will eat small vertebrates such as small lizards, snakes, and rodents. In captivity they do well on a diet of small rodents. Even when Coral Cobras are fully grown, I find that it is best to offer two small mice instead of one large mouse. You can feed your Coral Cobra a small pinkie twice a week when they are growing and then as they get older you will only need to feed them once a week.

Breeding these snakes is fairly straight forward; they can breed at the age of 2-3 years. A cooling period of around two months is required, usually around June and July in South Africa. Night time temperatures are dropped to 14-20˚C and day temperatures can be kept as normal. This can be done by placing your heating pads or cables on a simple timer that you can get at your local hardware; you can set it to turn off for 12 hours during the night and on for 12 hours during the day. After the two month cooling period, you can turn the timer off and leave the heat on 24 hours a day. Small meals can be offered every three weeks during cooling. A few weeks after the cooling period you can start placing the male with the female. I leave them together for around two days and then separate them. I repeat this process once a week until the female shows signs of being gravid. The key indicator will be that the lower three quarters of her body will start swelling. Two months after mating the female will lay her eggs, with a pre-lay shed around two weeks prior to laying. At the time of the pre-lay shed, you can place an egg laying container in the enclosure. This can consist of a plastic container big enough for the female to be inside comfortably. Cut a hole big enough for the female to get in, and place 3cm of slightly damp sphagnum moss in the tub. Female Coral Cobras can lay 3 – 11 eggs per clutch and, if large enough, can have two clutches each year. Infertile eggs in the clutch may be consumed by the female. Once the female has laid her eggs they can then be removed from the egg laying box and placed into and incubation box. An incubation box consists of a plastic container with a few small holes in its lid. It is then filled with a layer of vermiculite about 5cm deep. Weigh the amount of vermiculite that you are putting in the incubation container and then add the same weight of water. This will give you a good moisture level for incubation. Half-bury the eggs in this damp vermiculite and place them in an incubator at 29˚C, in about 60 days they will hatch. Hatchlings can be very fast and jumpy so be careful when moving them as they can be just as dangerous as the adults. Hatchlings should be housed individually in small containers.

The Coral Cobra is a true beauty amongst our indigenous venomous snakes. I have always enjoyed keeping this species and would highly recommend it to anyone who is experienced enough with keeping reptiles and dealing with venomous snakes. It makes me happy to think that a snake this great lives in our country: aren’t we spoilt!

A Complete Guide to the Snakes of Southern Africa, Johan Marais, Struik Publishers 2004