Posted at 15:29h in Arachnids by editor 0 Comments
3 Likes

Arguably the largest of all Poecilotheria, there is no doubt that these are strikingly-patterned and extremely attractive tarantulas. Their relative rarity in captivity results in consequently higher price for these tarantulas. They are indigenous to either the lowlands or mountainous areas of central Sri-Lanka, which is a moist high altitude climate, so therefore they like to be kept cooler than other Poecilotheria. These spiders also have a very dark colouration with a near-black venter, which is presumably an adaptation for absorbing heat quicker when the sun warms the mountain air.

Breeders and collectors have now separated the tarantulas from the lowlands and the mountainous areas into two forms, the Lowland form and the Highland Form. Many people, including tarantula enthusiasts, are always arguing how to identify Lowland vs Highland. Highland are more desirable and sell for much more money and people have been fooled into thinking they bought a Highland when what they got was a Lowland instead. The easiest way to ID the two is by what I refer to as tattoo ID’ing. The Highland has a black filled-in tattoo on its abdomen, whereas the Lowland is left unfinished. Refer to the images included with this article for further clarification. 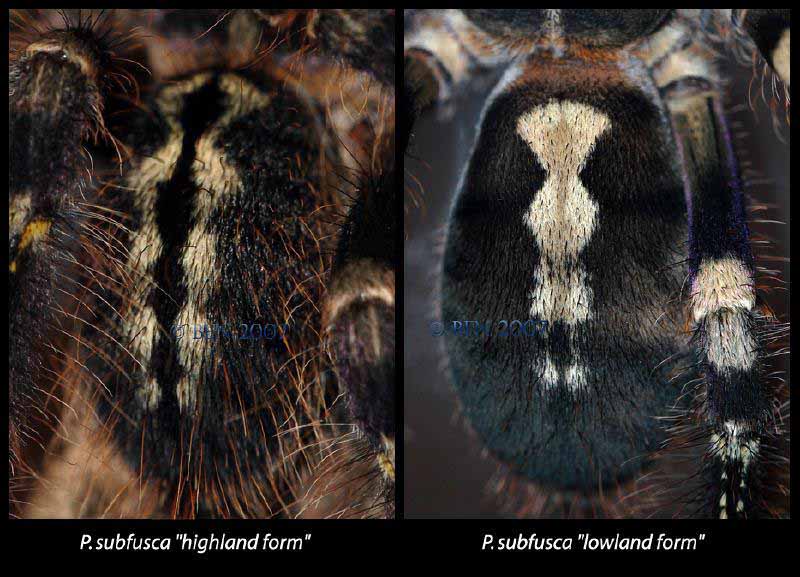 In their natural habitat, P. subfusca is found above the tea plantations in secondary scrub forest and remnants of montane forest. This spider inhabits hole retreats in dead trees, sometimes enveloped by fog. Even during the warmest months, February and March, temperatures rarely exceed 21°C, and during September the early morning hours may be as cool as 4°C at elevations near 2000m.

They are fast-growing, both large and extremely fast, but are considered to be the calmest species of their genus – something to be thankful for, given that the effects of their venom are severely unpleasant, to say the least. For speed and venom potency reasons these are not ideal for beginner keepers, and mistakes with interaction or conditions will most likely not be tolerated very well.

Housing
Housing these spiders requires a normal arboreal setup, with good levels of airflow and humidity nicely balanced, a large water bowl, and lots of climbing surfaces, and places to retreat. Provide a choice of hiding areas, and keep one portion of the tank very dark, as these spiders really do not like bright light. In the UK, a heating pad is necessary, but temperatures of around 17 – 21°C are tolerated well by this species, and they do not appreciate the higher temperatures of 26°C and up preferred by their cousins from the same country, P. fasicata.

Female P. subfusca can be housed in extra deep clear plastic containers 35 x 40 x 40cm with a few ventilation holes drilled in the lid. A thick layer of damp sphagnum peat is used for substrate and water is provided in a deep deli cup set at the bottom of the cage. Two types of retreats are provided: one enclosed hide such as a hollow log, and one open hide created by a vertical slab of cork bark propped against the inside of the enclosure.

Feeding
Standard tarantula food works well with P. subfusca – crickets, locusts, roaches, mealworms and superworms will all be taken with enthusiasm, and killed quickly. A very fast growing species, these spiders eat a lot in the earlier part of their lives, and as a result are easy to overfeed, and may not live very long if over-indulged. Males can expect to survive only 2 years or so, although females will live much longer.

Temperament
All Poecilotheria are shy, nervous, and retiring, but also very easily spooked, and equipped with surprising speed with which to escape threatening situations. Bites from P. subfusca are rare, but where bites have occurred, human reaction to them can be severe, are extremely locally painful, and cause body-wide symptoms which can include muscle cramps, dizzyness, vomiting, and fainting. Bites from this spider are often multiple, and they have a tendency to hang on as long as they can, suggesting that they are willing to inject venom in a defensive bite, and bites should not be assumed to be of the ‘dry’ variety. Hospital attention is likely to be necessary.

Breeding
Breeding P. subfusca is not very common in captivity and the first ever US breeding was in 2004. Mating seems fairly straight forward and it also seems the females will accept the males if left in the enclosure. The time between mating and egg sack production is very quick with this species – as short as 2-4 months, unlike some of the Poecilotheria in which as much as nine months could elapse between mating and egg sac production. The egg sac can be taken from the female for artificial incubation approximately 26 days later. Eggs sacks may contain around 50 – 70 eggs.

Conclusion
A well designed and well-built terrarium will be a huge advantage in looking after this spider. Strategic placement of heat pads and hides will allow you to encourage basking in the open, and to watch the spider at night, even when it is hiding, without placing undue stress on the animal. Use sections of black card to line the glass at the spider’s hide so that at night you can remove this to check all is OK with your hidden spider. Treated with respect, these animals are a joy to keep and watch, and come close to the very definition of ‘living art’.

For more information and more great articles see links below: