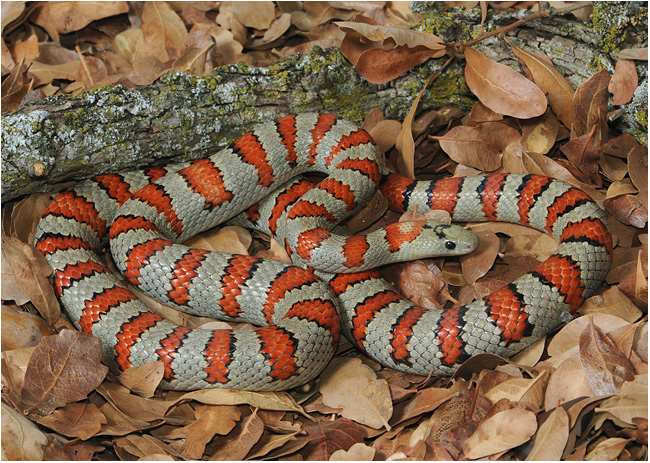 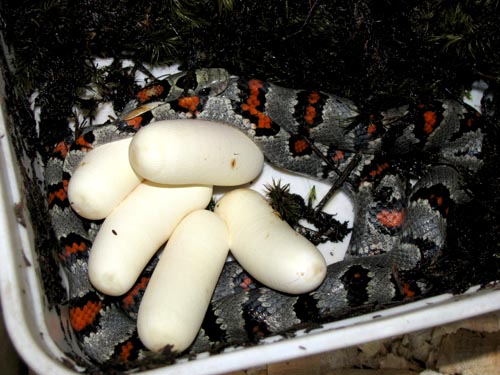 In my opinion the Durango Mountain King Snake has to be one of the most attractive snakes out of all the King Snakes, and through selective breeding certain colour varieties are becoming more and more attractive. They have a light to dark grey background colour that has bright orange saddle markings that have a black outline around them. These snakes are fairly hardy and have the same requirements as any other King or Milk Snake. If conditioned properly and put through a brumation period these snakes can start breeding as soon as two years old. I have just had a two year old Durango Mountain King Snake female lay a clutch of 6 fertile eggs! I must admit, although they are a bit more expensive than your more common King Snakes, they are worth the extra price and are excellent snakes even for beginners. They never seem to bite and not one of my Durango’s has ever tried to bite me; they tolerate handling very well.

Colour morphs in this species are still new and as far as I know there are none in South Africa at the moment. I have been lucky enough to have seen a hypomelanistic Durango Mountain King Snake when I was in the UK last year. It was a very striking snake. Let me explain a bit more about the hypomelanistic mutation. Hypomelanistic animals are animals that suffer from a malfunction of pigment cells producing melanin. This means that the animal still keeps its normal patterning but its colouration is considerably paler. You can see the comparison of a normal and hypo Durango Mountain King Snake in the picture on the left hand side of the page. Recently, an albino mutation has also been bred from the Durango Mountain King Snakes. In albino or amelanistic snakes the melanin has been hampered, meaning that they do not produce black pigment. This means the snake is left with white, yellow, orange and red colouration and they also have red eyes. There is also a less popular morph that is melanistic, which means that they have an increase of black pigment cells giving the snake an extraordinary black colouration. 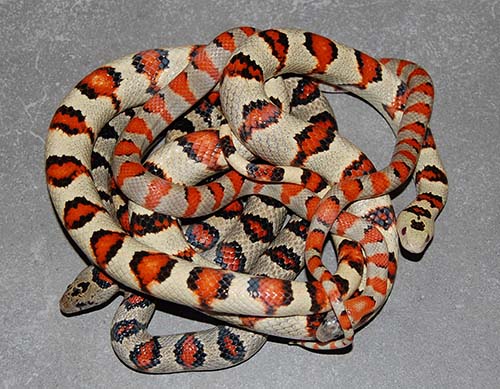 Colour variation due to selective breeding.

Keeping Durango Mountain King Snakes is fairly straight forward and they can be kept successfully and thrive in very simple setups. Some people may choose (if they only have a few snakes) to have a more attractive setup that can act as a display in their homes. Whatever you decide to use there are just a few things that will need to be taken into consideration when setting up an enclosure for your Durango Mountain King Snake. First of all, you have to have an enclosure that is secure; snakes are escape artists and can spend most of their nights moving around their cage trying to find any opening out of which to escape. Make sure that you have sufficient ventilation, which can consist of wire mesh or ventilation holes that the snake cannot get through. The size of the enclosure will need to be about ¾ of the length of the snake’s body. Heating is an essential part. The best way to provide a heat source is by using a heating pad which can be purchased at any pet store that supplies reptiles. The heat pad can be placed under one side of the enclosure where the temperature will need to be maintained at around 29˚C.

Breeding is a simple process and is stimulated by a change in temperature; this is brought about by a brumation period of two months, which is done during the winter months when feeding is stopped and temperatures are maintained between 14 – 18˚C. After this 2 month period the temperature is returned to normal and after a few weeks of regular feeding, the females are then introduced to the males’ enclosures. From the time of copulation the females take around two months to lay their eggs. I have noticed from personal experience and have also heard from other breeders that Durango Mountain King Snakes tend to take their time from their pre-lay shed until they lay their eggs, often taking longer than 2 weeks. Someone breeding this species for the fist time may start to worry and think that their snake might be egg bound but sure enough they eventually settle down in their laying box and lay their eggs with no trouble.

Eggs are incubated at 29˚C and will take around 60 days to hatch. Eggs can be incubated in vermiculite with a 1:1 weight ratio of water to vermiculite. In the past many keepers had trouble when it came to feeding hatchlings as the majority of hatchlings preferred small lizards and geckos as prey. Slowly after many years of captive breeding these snakes have adjusted well to feeding on pinkie mice from their first shed. They may at times take longer to accept mice than other colubrids but after a couple of weeks they generally start accepting pinkies with no problems. If you have a few problem feeders, first try the ‘brained’ pinkie method, and if that does not work the next best thing to do is to scent the pinkie with a common house gecko or skink.

I believe that the Durango Mountain King Snake is a rewarding species of King Snake to keep and the extra price is well worth it. I have found these snakes only a pleasure to keep and have never had trouble with them. Their striking colours and docile nature make them an ideal snake to keep!