The Gabino By David Viaene 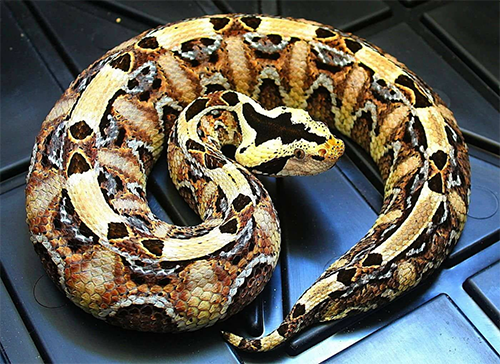 30 Jan The Gabino By David Viaene 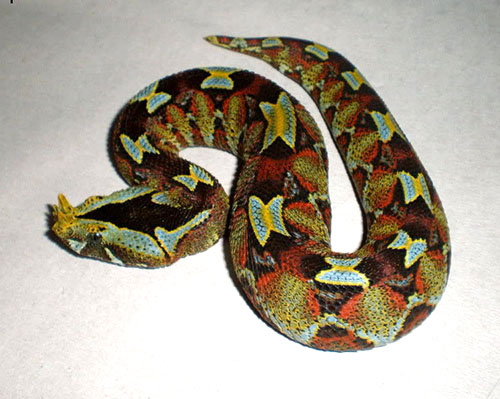 What is a Gabino?

In this article we are going to have a rare look at an exciting form of naturally occurring hybrid called the Gabino. A Gabino is a hybrid between a Gaboon Adder (Bitis gabonica or Bitis rhinoceros) and a Rhinoceros Adder (Bitis nasicornis). In advance I would like to apologize for any factual errors in the data I have collected. So very little information is known on the Gabino that is difficult to find information that is not anecdotal. If you do find any errors please feel free to contact me so I can update the data I have.

When I was doing my research on the Gabino I found that there are “subspecies” even with hybridized Gabinos. The Gabino that inspired this article belongs to Deon Nell of Apex Predators and his Gabino is a cross between a West African Gaboon Adder (B. rhinoceros) and a Rhinoceros Adder (B. nasicornis), however in my research I also came across a Gabino that used to be owned by Chantal and Gavin Carpenter of Kwazulu-Natal. They had a Gabino that was a cross between a Rhinoceros Adder (B. nasicornis) and East African Gaboon Adder (B. gabonica).

Geographic Range
The geographic range of Gabinos is mostly unknown. Deon Nell imported West African Gaboon Adders from West Africa and was fortunate to find a gravid female in his shipment. Gavin Carpenter imported a shipment of B. nasicornis from Uganda in East Africa and was lucky enough to find their Gabino in it.

So it appears the range of the Gabino could possibly be anywhere where the B. Nasicornis geographic range overlaps with B. Gabonica and B. Rhinoceros.

Gabinos most likely live in similar habitats to that of its ancestors, which are known to live in the tropical forests of Central and Western Africa as well as swamps and other areas of low altitude. They can also be found in secondary thickets, cashew plantations and in other agricultural land under bushes and thickets.

Behaviour
The Gabino (like its parents) is primarily a terrestrial and nocturnal animal. They spend their days hiding in leaf litter, holes, close to fallen logs and tangled trees. Their bright coloration gives them excellent camouflage in their natural environment.

While slow moving and placid most of the time, the Gabino is an ambush predator and is capable of striking at lightning speeds. Extreme caution is to be taken with Gabinos at all times. However, saying that, the Gabino seems to have inherited a lot of behavioural traits of the B. Rhinoceros and is usually a very tolerant snake even when handled. They rarely bite or hiss.

Venom
Very little is known about a Gabino’s venom as no studies have been conducted on captured specimens. B. Rhinoceros produces a cytotoxic venom and the B. nasicornis has a very potent hemotoxic / neurotoxic venom combination with the hemotoxic venom being more dominant. A Gabino could include a cocktail of all three venoms or it may just have inherited the venom traits of one parent.

Captivity and Feeding
Gabinos do well in captivity. Currently the large female Gabino (F1) at Apex Predator Park is kept in a large glass tank (2m x 1.5m x 1m) with thick eucalyptus as its substrate and the offspring (F2) are currently kept in a similar rack setup that you would use for B. nasicornis. Gavin Carpenter also successfully kept his Gabino in a rack system setup for Nasicornis. A Gabino does best with little or no disturbances. 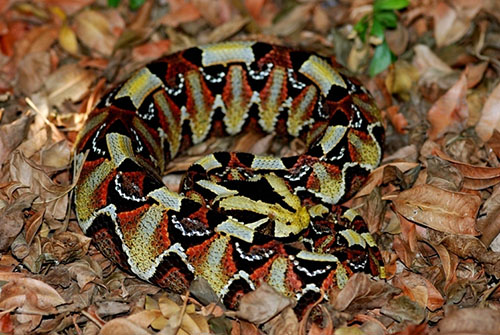 Gabinos do well on many popular substrates such as eucalyptus, aspen shavings, paper towel, and coconut husk.

Try keep the day to night ratio about equal as most Gabinos come from countries close to the equator which have equal amounts of daylight and night time. Ideally you should provide a basking spot of around 20°C – 32°C but it is unlikely they will use this often. The heat does help to aid digestion. Your average habitat temperature should ideally be around 20°C to 26°C. Humidity should be around 75%, although they do appear tolerant of humidity as low as 65%. If you are going to keep your Gabino at 65% humidity it is recommended you give them a bath in lukewarm water twice a month.

In the wild the Gabino would prefer to hunt by ambush and probably spends much of its life waiting motionless for its prey to wander by. The Gabino most likely feeds on small mammals but in wetland habitats they could possibly feed off toads and frogs as well.

In captivity Gabinos are happy to eat live mice and rats but can also be fed frozen/thawed feeders if presented with a pair of tongs.

Breeding
Currently, breeding of Gabinos in captivity is incredibly rare. In my research I was only able to find of one other instance where Gabinos were bred successfully. As mentioned earlier, Deon Nell of Apex Predator Park obtained a gravid female (F1). This gave birth to 17 neonates (F2) ranging between 18-25 cm in size. The gestation period for a Gabino is thought to be around seven months.

The patterns on the Gabino neonates varied between the offspring, with some of the offspring having patterns closer to B. rhinoceros and some displaying traits closer to B. nasicornis. Deon Nell is currently working on the third generation (F3) of his Gabinos and it will be exciting to see what type of neonates are produced then.

Conclusion
It was incredibly exciting to be able to research and photograph Gabinos at Apex Predator Park and special thanks needs to be said to Deon for giving us this rare opportunity. I am sure, like me, you are all excited as to what the next generation of Gabinos will look like in a couple of years’ time.

Special thanks to Bruce Viaene Photography for taking the photos.

attack of the b team tekkit