Posted at 08:59h in Arachnids, Blog by editor 0 Comments
0 Likes

Poecilotheria metallica has to be one of the most sought after and beautiful tarantulas in the hobby today. As slings they are usually a brownish colour and can often be mistaken for regular pokies but as they mature this brown colour is replaced with a striking metallic blue colour, which has made this tarantula stand out amongst the rest! Although this tarantula is still rare and hard to come by, they are fairly easy to care for and are one of the better Poecilotheria species to keep. That being said, this tarantula is still not recommended for beginners, as it is fast, can be aggressive, and has some fairly potent venom. Bites from this species have been known to cause intense pain, so handling should be avoided. They can also move very quickly and can defend themselves if they feel threatened. They do tend to choose flight rather fight. Just remember that tarantulas do not enjoy being handled, and this species is definitely no exception.

These spiders are fast growers and breeders have had males mature in less than a year! Rates of maturity will vary depending on a variety of factors, mostly how much you feed them and temperature, but on average they will reach maturity within 2 -3 years. Females can live for around 12 – 15 years whereas males will only live for 3 – 4 years.

Poecilotheria metallica is a semi-arboreal tarantula so keep this in mind when it housing them. As slings they seem to spend more of their time near the substrate, where they will make some elaborate burrows for themselves. As they mature and grow they seem to become more arboreal, making their burrows higher and higher up. In the wild this species will make their burrows under bark and in the hollows of trees. Try and replicate this environment by providing two pieces of cork bark that are placed together in a vertical position to form a hide.

With regards to their enclosures, their arboreal tendencies dictate a vertical enclosure that has high humidity and good ventilation. Humidity should be maintained at round 60 –90% and this can be achieved by spraying the walls of the cage every 2 -3 days and keeping the substrate slightly moist. This species can be housed in an enclosure with a minimum size of 1 x 1 x 2 times the leg span of the spider. Spiderlings can be housed in plastic honey jars or any similar type containers with secure lids. Holes can be drilled in the side of the enclosure to allow proper ventilation. Whatever the cage you decide to use, it should contain 2 – 5cm of substrate, a hide such as a piece of cork bark against the side, a shallow water dish, and good ventilation. Make sure that the water is always kept clean and is replaced on a regular basis. Substrate can consist of 70% peat moss and 30% vermiculite. You will find that they will make a small burrow at the base of the cork bark and then web upwards, sticking bits of substrate in the web to form a tube. Temperature should be maintained at around 26 – 28°C; they can tolerate higher temperatures but don’t let it exceed 32°C. A small heating pad can be placed on the back of the enclosure to help maintain temperature.

Gooty Sapphire Ornamental Regarded as the most beautiful and sought after tarantula in the pet trade.

Lighting is not necessary for this species as they are sensitive to bright light, so the ambient light from the room is sufficient. Dark hiding spots are enjoyed by this spider during the day, so make sure to provide some good structures to give them security. Poecilotheria metallica, like other Pokies, has a healthy appetite and can eat much and furiously when they are growing. Spiderlings and juveniles can be fed crickets half their body size about two or three times a week, adults can be fed an adult cricket 2 -3 times a week. Try offering your spiders a variety of insects from roaches to mealworms to keep things interesting and provide a variety of nutritional needs. Make sure that no uneaten prey items are left in the cage. When your tarantula does not accept its food this will most likely mean that it is approaching a moult; at this time don’t offer it food until about a week after it has moulted. Try and remove remains of the insects as soon as possible since due to the high humidity and moist substrate mould and bacteria can build up quickly. Exercise caution when cleaning their cage as they spook easily and can suddenly bolt out of their cage. It is a good idea to lightly tap or bump the enclosure before you open it to let your pokie know you are there so that it does not suddenly get a fright when you start to fiddle around in its space.

When young, P.metallica will often spend much of their time hiding away in their web tunnels and burrows and will often revert to hiding at the slightest disturbance, only coming out when the lights are out. As they get older they tend to come out more and are known to be great explorers of their environment.

For those of us that are keen to keep this critically endangered spider, it is important that we keep this spider with the intention of reproducing it. Captive breeding of this species is vitally important as its habitat is under serious threat due to cutting for firewood and timber. Another threat is collection by international collectors. P. metallica naturally occurs in a single location in a highly disturbed forest between Nandyal and Giddalur in India, which is severely fragmented and is as small as 100km2. Due to all these factors P. metallica has been listed on the IUCN Red List as critically endangered, and thus breeding this species in captivity is essential.

Although P.metallica might be a fairly hardy captive specimen that can tolerate slight changes in temperature and humidity, unfortunately they are not the easiest species to breed. There are many breeders that have tried to breed this species but have failed. If the breeder is lucky enough to have a mature pair mate and have the female produce an egg sack, there seems to be very few eggs that make it to slings. Let’s hope in the near future we can learn more about this species of tarantula so that we can breed them more successfully in captivity.

Currently, P.metallica are very rare in South Africa and, if available, slings can be sold for anywhere between R400+, with adult females going for twice this amount and even more! Some of the serious collectors in South Africa have adults so hopefully we will see some of these beautiful tarantulas bred in the future. 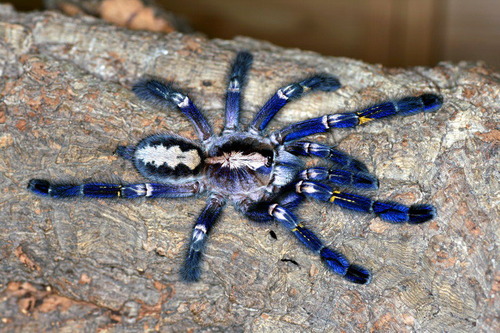 These spiders are fast growers and breeders have had males mature in less than a year!