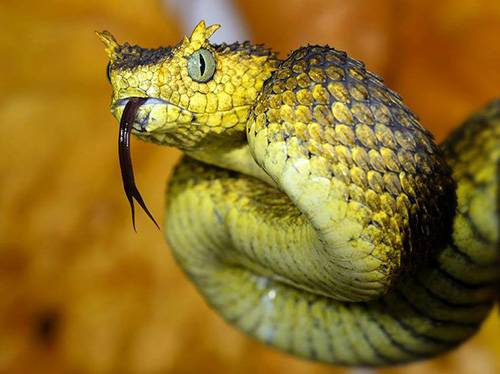 Atheris species in general are truly amazing and very desirable to keep for the more experienced venomous reptile keepers. I have to admit, each Atheris species is so beautiful in their own way, which makes them such a desirable genus to work with. What makes them even better is that they are from our very own African continent, which produces some of the most amazing snake species in the world. We have covered a few of the Atheris species in the past, such as Atheris squamigera (Variable Bush Viper) and Atheris chlorechis (Western Bush Viper), but recently at the last reptile expo we came across, in my opinion, the most beautiful of all Atheris species: Atheris ceratophora, the Usambara Eye-lash Viper. These are truly amazing snakes and are still very rare, with very few currently being bred. There is not much information on them and we did as much research as we could to get as much information about this species as possible.

This species is endemic to a few mountain ranges in Tanzania (Usambara and Usungwe Mountains). This used to be the only horned, arboreal viper known from Africa, until the discovery in 2011 of Atheris matildae, also found in Tanzania. Atheris ceratophora is a small-sized, mostly nocturnal and heavily arboreal species with maximum sizes ranging from 42 to 54cm in length, with males being somewhat smaller than females. There is only one species recognized at this time with no subspecies. The body colour is highly variable and there are a few colour phases recognized, with the body colour being anywhere from a uniform drab olive, banded black and yellow, mottled green and black, to a very rare solid black phase.

As mentioned earlier, it is interesting to note that in 2011 biological surveys in southern Tanzania by the Wildlife Conservation Society and the Museo delle Scienze of Trento, discovered a remarkable new species of bush viper. It looks very similar to the Usambara Eyelash Viper (Atheris ceratophora) but is considerably larger, differs in scalation, and has a genetic divergence of the mitochondrial gene of 3.18% and an estimated divergence time of about 2.2 million years. It has been named Matilda’s Horned Viper (Atheris matildae).

Matilda’s Horned Viper is found only in a remote montane forest fragment in Tanzania’s South West. The site probably represents the remnant of a wider forested landscape, interspersed with plateau grasslands and possibly naturally isolated from other forest blocks. It is therefore probable that the viper is a highly range-restricted forest species. We have estimated an extent of occurrence considerably smaller than 100 km2 and a quality of habitat in continuing decline. According to IUCN guidelines, it should be listed as ‘critically endangered’.

They have now initiated a small breeding program for this new viper in Tanzania. This is intended not only as ‘insurance population’ to protect the new species from overexploitation, but also to facilitate the conservation of its threatened habitat so that this unique animal can persist in the wild. They are planning to make available the first few dozen offspring from the captive population in order to provide the market with captive-bred specimens of the new species. The aim is to avoid collection of wild caught specimens, lower the price of the animal, and encourage responsible captive breeding by keepers in the most highly demanding countries. The ultimate goal is also to raise awareness and support for an in-situ community-based forest conservation programme, including community support, education and forest management. Matilda’s Horned Viper will, it is hoped, be a flagship species for the initiative.

Back to the Usambara Eyelash Viper: these snakes are only rarely produced in captivity, and imported animals are typically quite drab and dirty when brought in, but then shed to reveal amazing colours. Litter sizes are quite small, with five babies being large. The scales are heavily keeled and when agitated, this species may rub or “rasp” their scales together to make a hissing sound to scare away potential predators. If that defence fails, this species is typically very quick to strike to defend itself and will do so repeatedly in quick succession. Tail tips are usually yellow or cream coloured and are used for caudal luring by young animals. The tail is also prehensile and is used for grasping, and sometimes hanging from, branches to ambush unsuspecting prey. This bush viper gets its name from the 1-3 “horns” over each eye. The horns are actually modified scales that may act to disguise the location of the eye from predators, or may act to shield the eye in some fashion.

This is a high-elevation species with particular husbandry needs. It is recommended that all animals be caged individually, even though aggression and cannibalism have not been witnessed with this species. Males and females can be testy during breeding cycles and care should be taken to avoid any unnecessary bites. Tall, spacious cages are needed for this species to exhibit their natural arboreal tendencies, which is very high with this species, though the degree of arboreal time may vary from individual to individual. They have also been kept quite successfully in tubs in rack systems with just enough height given for the animals to get off the floor of the cages. Being ambush predators, they can be quite inactive at times, but may sometimes roam their cages at night. Contrary to previous information, I have witnessed all of my bush vipers drinking from water bowls and I supply one with fresh water at all times. Supplemental misting may be beneficial, especially to fresh imports not accustomed to the water bowl yet. 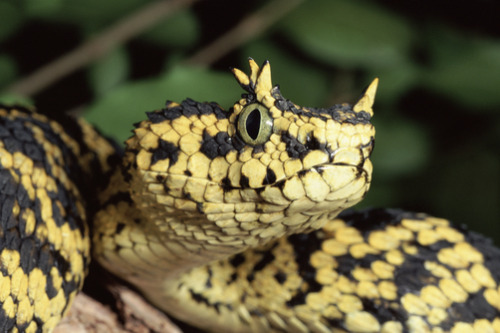 Substrate
Anything from newspaper to Repti Bark to cypress mulch has been used successfully with this species. Substrate typically comes down to keeper preferences, but cedar mulch should be avoided with all reptiles.

Hidespot
May be used more frequently by certain individuals, but not at all by others. I always offer a hide spot, whether it is a half-moon bark hide, or just a dense cluster of plastic plant leaves. Most animals will sit out in the open most of the time, but some may hide in leaf clusters during the day.

Humidity
Is somewhat variable in the wild with this species. Their natural habitat is elevated montane forest at 1400 meters above sea level, and they experience dry and wet seasons, but not to the extent of the lower elevation areas. While not quite considered a “cloud forest” species, this species does like it damper and cooler than some other species of Atheris.

Temperature
A thermal gradient should be offered, with the warm end of the enclosure in the upper 26°C and the cool end in the upper to mid 20°C. I have also heard of people saying that they have kept theirs with a warmer hotspot of about 30°C with no problems at all. I think whatever temperature your spot, maybe the big thing is to make sure you have a good thermal gradient so that the snake can choose the temperature which it is most comfortable at. Offer both a hidespot and a roost on both ends of the spectrum so that the snake doesn’t have to pick a proper roosting spot over the proper temperature that it wants to be in. Night time drops of a few degrees are acceptable, if desired.

Feeding
In captivity, many bush vipers will feed to obesity, especially females. It’s far too easy for the keeper to eagerly feed an animal that so readily enjoys being fed, but this is usually to the detriment of the animals. Fat animals do not breed well and do not live long. Appropriately-sized rodents are the typical diet in captivity and they are higher in fat content than the frogs and lizards that make up most of their diet in the wild, so feed accordingly. Babies may be fed weekly to encourage rapid and healthy growth, but as they mature feedings should decrease in frequency. I feed juveniles every 10-14 days and adults may go 3 to 5 weeks between feedings, depending on the time of year. Males may go off of food entirely for months at a time during the off season, but will feed regularly at other times of the year.

Neonates typically will take to baby mice (pinkies) with little problem, but some babies may be stubborn. The neonates are tiny and will need the pinkies cut into parts for them to feed on and may need to be tease fed. Tease feeding involves tapping the baby’s tail, body, or nose with the prey item in order to entice it to eat. Also, being nocturnal, problematic feeders may respond better to night time feedings.

Venom
While considered mildly venomous at one time, it has since been proven that Atheris bites in general are serious bites. There is no antivenin manufactured specifically for the species, but it has been reported that Echis polyvalent has been effective in treating bites of other Atheris species.

Overall, the Usambara Eyelash Viper is an impressive specimen and I have heard of a few reptile keepers that have had them in captivity for a number of years now without any issues. That being said, it seems they are still a challenge to breed and there is very little information about their cycling period for breeding. Being an African species I would suggest cycling them in a similar way to other Atheris species by providing them with a period of cooler night time drops not colder than 15°C. In conclusion, if you are fan of arboreal vipers the Usamabara Eyelash Viper should definitely be at the top of your list!