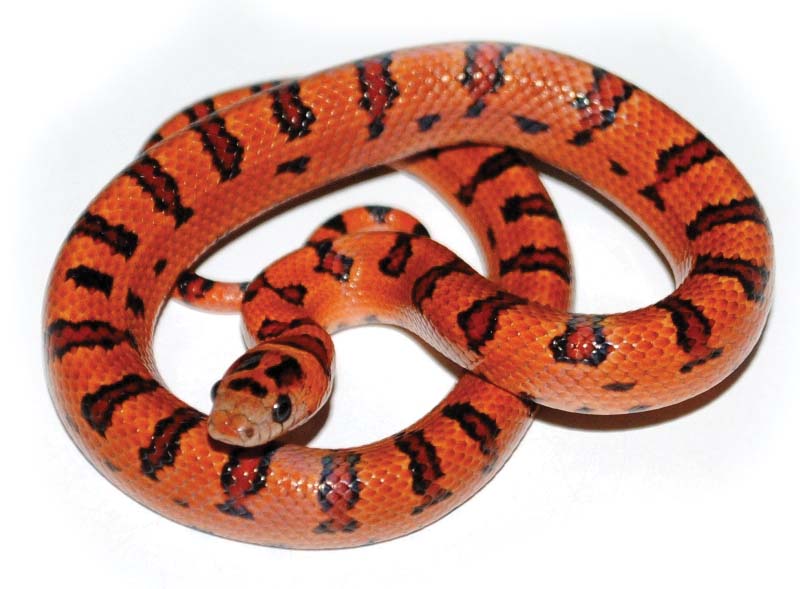 The Variable Kingsnake (also known as Thayer’s Kingsnake) has to be one of the more unusual and unique of all the kingsnakes available today. As the name suggests, this species of kingsnake can vary considerably in colour and pattern. The Variable Kingsnake can look quite similar to the Grey Banded Kingsnake, Durango Mountain Kingsnake and the Mex Mex Kingsnake (the “mexicana” group). What is also interesting is how all the different phases can hatch from one clutch, which makes it a very exciting snake to breed. The Variable Kingsnake naturally occurs on the eastern slopes of the Mexican plateaus in Tamaulipas, south Mexico and into Central America.

The Variable Kingsnake has a very docile temperament, which makes this a great snake to handle, especially for children. They very rarely bite, and although they can occasionally be a bit nippy as babies, so are the majority of snakes.

These snakes grow to between 60 – 90cm in length, so as well as being a good species to handle they are also a bit smaller then most corn or king snakes which generally grow to about 1.2 – 1.5m in length.

Colour Phases The colour phases of the Variable Kingsnake are what make this kingsnake so unique amongst all other kingsnake species. At times it may be a bit confusing, so I will try to explain the different phases in this article. There are four distinct phases which are: the leonis phase, buckskin phase, milk snake phase, and the black phase. These phases can be clean or at times some individuals may have a mix of the phases.

Leonis Phase: This is one of the most widely available phases as they are produced the most when breeding Variable Kingsnakes. Their ground colour ranges from very light grey, beige, and cream to tangerine orange with very bold red banding outlined with black.

Buckskin Phase: These are not as common as Leonis phase but have the closest resemblance to Grey Banded Kingsnakes (Lampropeltis Mexicana Alterna). Their ground colour consists of grey ranging from light to dark, again with the brilliant red banding outlined with black 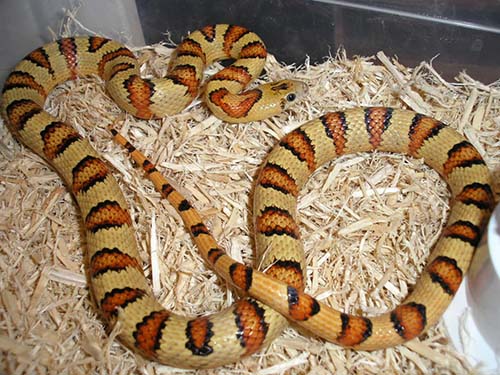 Milk Snake Phase: These are very similar looking to Milk Snakes, hence the name, but in a way different and have fantastic colours! Unlike the red, black and yellow banding of Milk Snakes, these have wide red bands as the main colour but rather than having yellowish bands like a Milk Snake, the Milk Snake Phase Thayer’s seem to be almost white, with the black borders around the saddles, which in some ways is more attractive than the milk snakes. Some people consider that they have more of a similarity to Arizona Mountain Kingsnake (Lampropeltis pyromelana pyromelana). These are also not as common as the Leonis Variable Kingsnake but there are generally a few in each clutch of eggs. 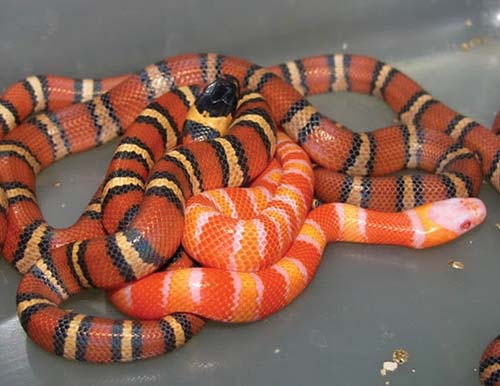 Black/Melanistic Phase (‘melanistic’ means increased amount of dark pigments): The Black Phase is the rarest one of them all! You don’t tend to get as many of these in a clutch of eggs, which tends to reflect in the price difference when sold in the pet or hobby trade and they are usually more expensive than the other phases. They are solid black and sleek in colour head to tail. If you like Mexican Black Kingsnakes (Lampropeltis getula nigrita), but want something that doesn’t get quite as big and with a more docile attitude, then this is the snake for you! Breeding Variable Kingsnakes can be very interesting as they are polymorphic. This means that whatever phase you breed together, there is a chance to produce all the colour phases in one clutch, so you can’t predict what colour babies you are going to get, unlike many other snakes. 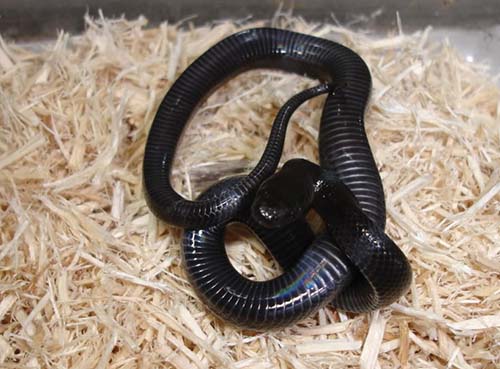 Variable Kingsnakes can basically be kept the same way as other kingsnakes and Milk Snakes, and most of the time their enclosures don’t even need to be as big. These snakes are best housed individually, this makes maintenance and feeding much easier, and there is no chance of one of the snakes eating the other: although this might be rare it can and has happened. Minimum enclosure size for these kingsnakes is 60cm x 30cm x 20cm. A heating pad is essential and should be placed under one end of the enclosure where temperatures can be maintained at around 29˚C. Substrate can vary depending on what you prefer. The two most commonly used substrates are newspaper, and good quality, dust-free sawdust. If you spot clean on a regular basis when using sawdust you will only need to do a complete clean every 2 – 3 months. When doing a complete clean, use a reptile-safe disinfectant to clean the entire enclosure. Make sure to provide a water bowl with clean water at all times. A hide is also a good addition, and will help your snake to feel more secure in its enclosure, preferably have two hides and place one on the cool end and the other on the warm end of the cage. Variable Kingsnakes are nocturnal, so there is no need for any special lighting.

In the past, hatchlings of these snakes were quite difficult to start off as they would prefer to eat only geckos. Today, due to select breeding, captive-bred Variable Kingsnake babies will eat pinkies from their first feed with little difficulty and are considered good feeders. If you ever have any difficulty in getting a hatchling to feed, a pinkie that has been scented with a lizard will usually do the trick. Adult snakes can be fed small mice: rather try and feed these snakes two smaller meals than one large one. Babies can be fed 1 to 2 times a week and adults can be fed once a week. 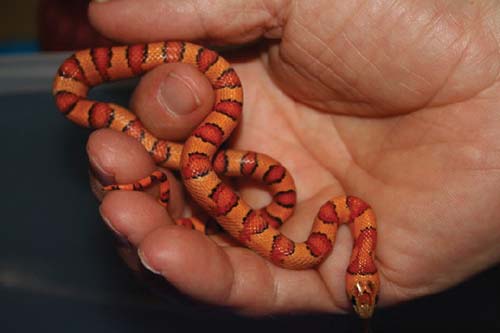 As mentioned, breeding the Variable Kingsnake is one of the most exciting things about keeping this snake. What is so exciting is that you have a chance to get four different colour phases out of one clutch! Variable Kingsnakes will reach sexual maturity at around the age of 2 – 3 years. Make sure that adults are fed well and are in good condition before considering cycling them. Brumation is best done during the cooler months, which in South Africa means May, June, July and August. It is very important to make sure that you stop feeding two weeks before you place your snakes into brumation. This will ensure that there is no food left in their gut, which can be fatal to them at the lower temperatures. Once their gut has been emptied the brumation period can start, and this is done by slowly lowering the temperature over 2-3 weeks until it reaches around 10-12˚C. This temperature needs to be maintained for around 2 – 3 months. At the end of the brumation period, you can start slowly increasing the temperature, again taking 2 -3 weeks, until it is back to normal. Once temperature is back to normal feeding can resume. Normally after their first shed out of brumation they are ready to be paired up. Place the female in the male’s cage and, without disturbing them, check on them now and again just to make sure they are not attacking each other after a few hours, you can place them back into their enclosures. As they are nocturnal I usually place them together just before lights out. In about 3 -5 days time I will mate them again and repeat the process. I try to mate my snakes 3 times or more just to ensure the best possible chance.

If mating is successful it normally takes around two months for the female to lay eggs. About two weeks prior to her laying she will have a pre lay shed. Once this is seen, note the date and place an egg-laying container in the enclosure. I use a 2l plastic ice-cream tub and cut a hole of about 4cm in diameter. Fill one quarter of the tub up with damp sphagnum moss. Variable Kingsnakes can lay between 6 – 14 eggs.

Once the eggs have been laid, you will need to place them in a separate container. You can also use a 2l ice cream container, with about six small holes drilled in the lid, and put in about 150g of vermiculite mixed with 150g of water. This ratio works well, although you might need to add a bit more water in about 4-6 weeks time. Place the eggs half buried in the vermiculite, put the lid on, and them place them in an incubator that maintains the temperature at around 29˚C. At this temperature the babies will take around 60-70 days to hatch.

In South Africa, these snakes are still quite hard to come by, but there are a few breeders that have some excellent stock of the Variable Kingsnake. Although one of these snakes might be a bit expensive for a beginner, they still make a great first time or pet snake, although if keeping these snakes I would recommend getting a pair and breeding them, since this will allow you to enjoy this snake’s unique ability to produce different colour phases out of one clutch. All in all, the Variable Kingsnake is a great snake to have!