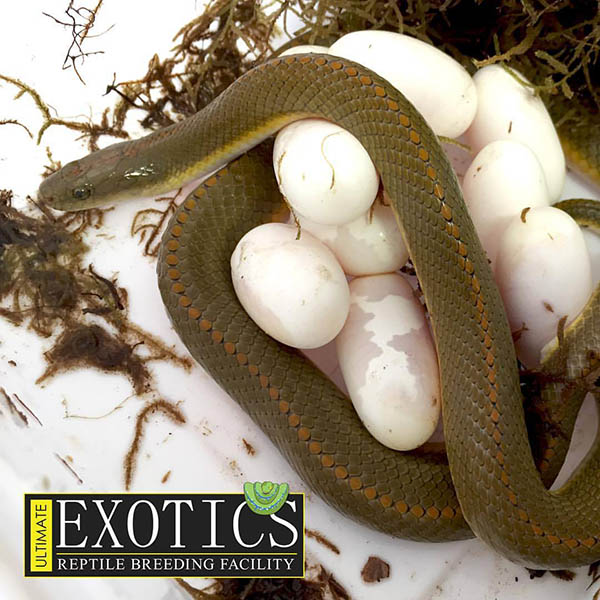 There are few snakes that are more eye-catching than the beautiful and unique Aurora House Snake. The first thing that makes them stand out from the rest of our local colubrids is their colouring. They have a beautiful olive green (some are very dark olive green and others are a bright yellow green colour depending on locality) colour with a beautiful orange stripe that starts between their eyes and runs down along their dorsal down to the tip of their tail.

The Aurora House snake is indigenous to the beautiful country of South Africa and is found from the Cape Peninsula through the Western and Eastern Cape into parts of the Northern Cape, the Free State, much of KwaZulu-Natal, Mpumalanga, Limpopo and eastern Northwest. It is a terrestrial snake that favours damp localities grasslands and forested coastal areas, sometimes in close proximity to people as is suggested by the common name ‘House Snake’.

The Aurora House Snake is fairly small snake with adults reaching on average between 450 to 600mm and on occasion a large specimen may be 900mm. They are nocturnal snakes that may bask in the early mornings or late afternoons. It is a secretive snake that is seldom seen, this should be considered when keeping this snake in captivity, as they will not be a good display snake.

In Captivity
The Aurora House Snake has been kept in captivity by reptile keepers for many years. That being said, they are still not common in captivity and I wouldn’t even consider them as established in captivity. I would also not recommend them as ideal beginner snakes, as they are quite finicky and require a bit more attention for them to do well in captivity long term. Although some of the adults are very tame our babies and sub adults have a lot of attitude, and although they are not quick to bite, they don’t like to be handled much and will hiss and whip around. They are shy snakes and prefer to be left alone.

In the past we have started with newly hatched captive bred babies, and for example out of 7 babies we would find that maybe 2 or 3 of them would take tiny day old pinks. Most of the others would take a pinky that has been scented by rubbing it on a tropical house gecko and the others that didn’t take scented pinkies would eat geckos. The ones that ate pinkies we then kept back for breeding stock. These have done well with us in captivity, although I must say compared to other house snake species they grow very slowly with some only reaching breeding size at 3 – 4 years of age. As they grow it seems that they still like to enjoy smaller meals; some are fussier than others and prefer freshly killed prey or small fuzzies. Try different methods of offering prey to your Aurora House Snake and figure out what suits them and then stick to that routine. If you are having trouble try to offer rat pinks and also try multimammate mice.

We keep them same way as we keep our other colubrids in 26litre Addis tubs although they do seem to like cooler temperatures so a hot spot of 28°C can be maintained with the other end of the enclosure being room temperature. Make sure there is a sufficient gradient so that they can get away from the warm side when they feel like it.

When it comes to substrate we use wood shavings some breeders prefer to use newspaper. We also have a hide box with a small hole in it and damp peat moss, which the snakes like to spend time in. A fairly large water bowl that the snake can soak in will be necessary.

When looking at acquiring an Aurora House Snake it is important that you buy established captive bred animals from a known breeder. As they are an indigenous species you may also need a captivity permit to keep them in your province in South Africa so make sure to check this with other breeders or your local permits office. Wild caught snakes may come up for sale from time to time but I would recommend you do not buy these as wild caught snakes generally don’t adjust well to a captive environment and they are best left in the wild. Sometimes permits put people off keeping certain species, but it shouldn’t – they are easy to get, it is just a process you need to follow and for anyone passionate about this species it is well worth the effort.

Breeding
Like other house snake species, Aurora House Snakes are sexually dimorphic and someone with experience can tell females apart from males by their tail length. Males have longer tails than females and are generally quite a lot smaller than females. Breeding this species is not so easy and not everyone has been successful when it comes to breeding Auroras. Let us look at breeding methods that have worked for some breeders.

As mentioned, the Aurora House Snakes take a long time to mature (3-4 years for females). Once they have reached maturity you will need to put them through a brumation period like we do with our Kingsnakes, Milk Snakes and Corn Snakes. I often refer to the Aurora House as the South African Milk Snake. We start off by stopping feeding two weeks prior to the brumation period to allow them to digest food and pass waste. After that we begin to lower temperatures. From our experience and from talking to others that have bred this species, they allow night time temperature to get below 10°C and even get as cold as 4°C, with a day time temperature below 18°C.

This fluctuation of temperature between night and day is important. No food is offered during this time, just clean drinking water. This cooling period should be for 2 – 3 months. After that you can return temperatures to normal and resume feeding. After a few weeks males can be introduced to females and mating is usually seen quite shortly after introduction.

Generally two months after mating your Aurora House Snake will lay eggs. When the female is gravid you will notice the bottom half of her body starting to swell and her scales start to stretch. About two weeks prior to egg laying she will go into the blue and have a pre-lay shed. At this make sure that your hide box with the damp peat moss is clean and slightly damp; this is where she will lay her eggs. Aurora House Snakes will lay between 8 – 12 eggs and incubation of the eggs is the same as any other colubrid eggs. Incubate in damp (1:1 water to weight ratio) vermiculite in a container that has some small air holes, and incubate eggs at 28 -29°C. At this temperature babies will hatch in around 60 days.

I personally think that with time and selective breeding of the best feeding animals we will get a strong strain of captive bred Auroras that will do well in captivity and feed on rodents with little effort. These snakes are a real gem when it comes to South African snakes and anyone planning to keep them must be serious about their correct husbandry and make sure to purchase captive bred stock. All in all the Aurora House Snake is a rewarding snake to keep and is without a doubt the South African Milk Snake!