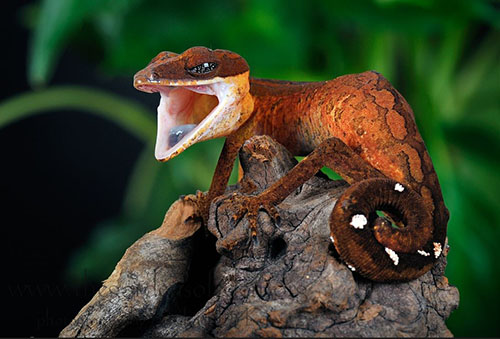 A truly unusual gecko in appearance and character, the rare Cat Gecko is still new to the gecko-breeding world. Straight away people are curious when they hear of a Cat Gecko and they wonder how they got that name. Their movement looks like the movement of cats and they have a habit of curling up with their tail around themselves when they sleep, similar to a cat! Even though this species is not yet available in South Africa we thought we would do a species profile on them to generate some interest, as it is always exciting to learn about new species that are being kept and bred in other parts of the world and will hopefully be available to us in the near future.

These unique Geckos come from Indonesia, Malaysia, Singapore, Cambodia and Thailand. There are two recognised sub-species, which are Aeluroscalabotes felinus felinus and Aeluroscalabotes felinus multituberculatus. There have been quite a few discoveries of other Cat Geckos which have been thought to be possible new sub-species but only time and research will prove this theory. Cat Geckos inhabit areas of montane forests where temperatures remain quite cool when compared to the general climate of Southeast Asia. For example, Cat Geckos can be found in the Cameron Highlands of peninsular Malaysia. This region is located approximately 1830m above sea level, and average temperatures tend to hover around 21°C in the daytime and 10°C at night. The heaviest rainfall occurs from September through early December, but generally speaking, Malaysia is wet year round. Depending upon the region, the duration of the rainy season and the average annual rainfall may vary. The Cameron Highlands receives approximately 20-25cm of rain annually, making it the ideal Cat Gecko environment. Slow but precise movements and natural adaptations for life in the trees, such as claws, nimble legs and tree-bark body colour, make it clear that Aeluroscalabotes felinus is truly an arboreal gecko. Keeping the attributes of their natural environment in mind is critically important when creating a suitable enclosure at home.

Cat Geckos have a slender body with nimble legs and an angular head. The dominant body colour is a rust or reddish-brown, which is segmented along the spinal column by a web-like structure of intersecting black lines. This pattern defines a series of irregularly shaped orange spots. Many specimens also exhibit a white speckling, which begins near the underside of the mid-section and branches upward along the flanks. The way these geckos grasp a branch is more reminiscent of chameleon physiology than other gecko species. Movement is generally slow and deliberate. Even while hunting prey, a Cat Gecko’s approach is closer to stalking than a quick pursuit. However, if startled, this gecko can make an abrupt leap for safety, so prevent specimens from falling from any significant height. Cat Gecko eyes are truly spectacular. The species has large eyes because it is a nocturnal animal. Being a Eublupharid species, it possesses eyelids like Leopard Geckos.

So far it has been proven that keeping adult Cat Geckos in a sterile, naturalistic environment is best. They are secretive, and need to feel secure in order to thrive. Males and females are kept separately and are only introduced to each other for 3 months of the year for breeding. Males can be kept in a vivarium that is around 40x30x30cm and females can be kept in cages around 55x45x55cm for one and if you want to keep two together then a suggested size is 80x40x50cm. Temperature is important for the success of your Cat Geckos and they should be kept at around 24 -28°C during the day and at night time temperatures should be 19 – 22°C. Extreme temperatures on both ends should be avoided. If you have lighting during summer you can keep the light on for 14 hours and in the winter for 10 hours a day. Cat Geckos are good climbers, so it’s a good idea to put a lot of thin branches inside the vivarium. Epipremnum sp., Ficus sp. and Scindapsus sp. are perfect living plants for Cat Geckos, because they have big leaves and thin branches. As a substrate use a mix of peat and sand (50:50), because it preserves the humidity well. Light spraying around once a day to maintain a humidity of 65-80% during the day and more than 90% at night is recommended. Hatchlings can be kept in 20x20x20cm boxes with paper towel on the ground, some thin branches and a moist hiding place. After 6-8 weeks hatchlings can be moved to bigger boxes of 30x20x20cm with the same type of set-up as the males.

When it comes to feeding, all types of insects will be eaten such as cockroaches, crickets, mealworms, and snails (especially for the gravid females). They are very effective hunters, despite their slow methodical approach. Only two or three appropriately sized insects should be offered every other night. Introducing too many feeders at a time is very stressful to these geckos. Uneaten prey should be removed in the morning if possible. There are claims of mineral sensitivity in the genus, so supplementation is very light. 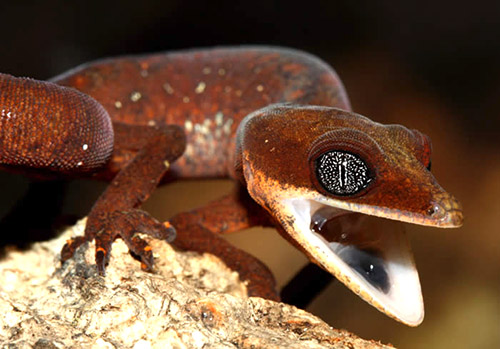 Breeding
Breeding, incubating eggs, and raising hatchlings are all very challenging in this species. They are a species that stresses easily and everything has to be right before they will breed. Before any breeding effort can begin, keepers must accurately distinguish male and female geckos. Several physical characteristics help with this identification. Reaching total lengths of approximately 10 – 13cm, male Cat Geckos have angular heads and pronounced hemipenal bulges on mature specimens. Female Cat Geckos reach average total lengths of 15-20cm, exhibit a broader head shape, and lack the hemipenal bulges. A cooling period spanning two months seems to be beneficial when breeding Cat Geckos. This is where providing a slightly larger enclosure for the female comes in handy. When the adult pair is not breeding, they can get out of each other’s way. This minimizes stress as a result of the temporary housing situation. Leave the pair together for two to four weeks, and then return the male to his enclosure. Depending on the temperature, it may take anywhere from two to six weeks for the female to show signs of successful mating. The most obvious sign is a pronounced bulge in the abdominal area. These are naturally slender geckos, so any roundness to a female’s shape is a good sign that eggs may be on the way. Successful copulation means it is time to prepare for eggs. Female Cat Geckos generally lay two eggs per clutch with an average of four to six clutches per season. They will generally seek out a well-covered portion of the substrate, such as beneath a half-coconut hide or piece of cork bark. This hiding place helps shelter eggs from excess moisture during regular enclosure misting.

Although there are different incubating mediums, vermiculite works well. Select an appropriately sized deli cup with four air holes about one fourth inch in diameter along the side, half-fill it with vermiculite and moisten the medium until water is free-floating. Then compact the vermiculite and drain it, so excess water is removed. This process creates a suitable environment for incubating Cat Gecko eggs. If one is to be precise, a 1-1 ratio of vermiculite to water should be used for incubation. Use a forefinger, make two impressions just deep enough to safely cradle the eggs in the vermiculite and then carefully place them in these indentations. Do not roll or turn the eggs during this process, or your incubation efforts may fail. Place the lid on the deli cup, and relocate it to an incubator set to 23°C. Some breeders believe a drop in temperature during the night is beneficial to the eggs, so keeping them at room temperature may be better. Both methods are sufficient with no variation in egg health. Cat Gecko eggs can be incubated in temperatures ranging from 18-27°C. At the higher end of this range the eggs hatch sooner and hatchlings are smaller, making survival somewhat more difficult. At a consistent temperature of 23°C, the incubation period lasts approximately 75-80 days.

Overall, Cat Geckos are certainly all-round unique geckos. I have read that Cat Geckos are thought to be the most primitive of living gecko species, so they provide a glimpse back in time as to what the first Eublepharids (eyelid geckos) were like on earth. Although still rare in the reptile hobby around the world, they are successfully being kept and bred in captivity, and hopefully in the near future they will be more readily available to be imported and then we can have the privilege of seeing these beautiful geckos in the flesh! At this stage these geckos are not recommended for beginners and only experienced gecko enthusiasts should take on these delicate and rare geckos for breeding projects. 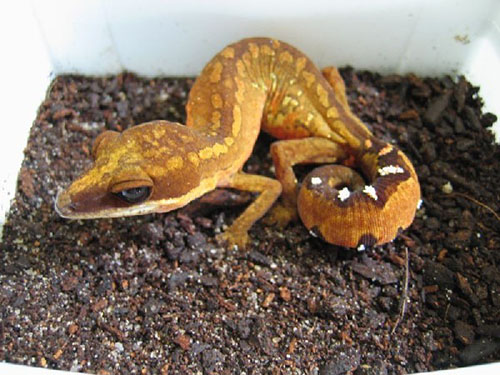 This Gecko (Aeluroscalabotes felinus) possess eyelids and is capable of closing its eyes.