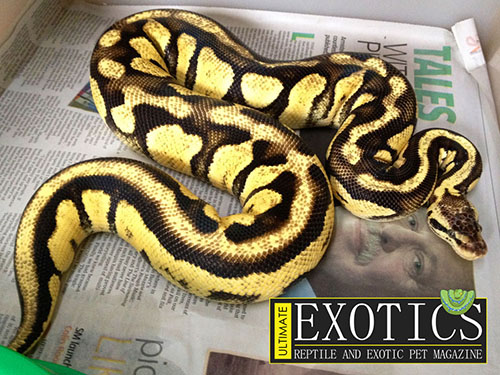 This is an exciting story of a new Ball Python morph that we have proved out at Ultimate Exotics. It happened completely by chance, as I am sure many new mutations occur. I remember when I bought my first Ball Python pair. There were very few Ball Pythons around in South Africa at the time and there certainly weren’t any captive bred ones. Some guys had imported some ranched babies and were selling them at R2 500 each! This was around 12 years ago. I had always wanted to get Ball Pythons, so I jumped at the opportunity and bought a pair at the Durban expo, which was held at Gateway all those years ago. I raised these snakes and three years later was determined to breed them, at that time there was very little information on breeding Ball Pythons so I just used what information I could get my hands on and followed everything step by step. At that time there were a lot of ranched and wild caught Ball Pythons in collections that gave difficulty breeding. Many times I saw them lock and I was hopeful, but nothing happened the first season, the second season came and same story: lots of mating but no ovulation and no eggs. The third season came and I wasn’t very hopeful; there were some other snakes I wanted to get which I knew bred more readily and I had a customer that was keen on the pair of Ball Pythons, so I sold them to him for the price I had paid for them and moved on. Later on the customer told me the female didn’t eat for 5 weeks and then laid a perfect clutch of eggs! I could have kicked myself! Needless to say I had a lot of calls from my mates saying I hear you are selling gravid female Ball Pythons, do you have any for sale? 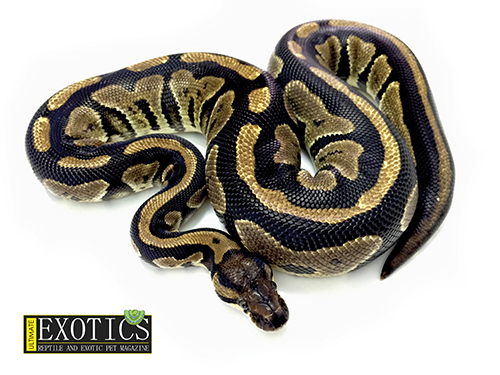 After that experience I was determined to redeem myself and get some more Ball Pythons and breed them. I had waited a few years and over that time the American morph market in Ball Pythons was booming; South Africa was quick to jump onto this trend and few guys started importing some of the more common morphs over there such as the pastels and spiders etc. I decided that it was now my time to get involved and I purchased a pair of pastels and female spider. After about two years my male pastel was ready to breed but my females were still just too small. A customer had an adult female pet Ball Python which he was happy to trade for some other snakes I had bred. It was perfect timing for me as it was in the beginning of the year and I knew I could use my pastel male on this female, which I did. Everything went to plan with the cooling and mating and I was excited to see an ovulation and later that year, on the 22nd of October 2012, we got a nice clutch of 8 eggs. The eggs were setup for incubation. I was planning on waiting for the first eggs to pip then I was going to cut the rest of the eggs. On day 60 I saw two eggs start turning off colour, concerned I quickly cut them open and unfortunately the babies were dead in the egg. I quickly cut the other 6 eggs and all the other babies were fine (I have never had this issue again so not sure why those babies died full term). I ended up with four pastels and two normal. Success! I had finally redeemed myself. When I saw the babies I was very happy with the colouring and I thought to myself that they are beautiful babies, but as this was my first time hatching Ball Pythons I thought nothing more. 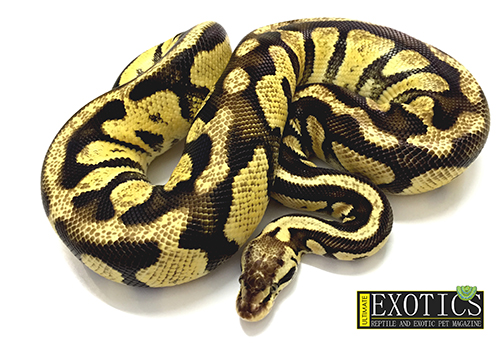 I was going to hold back most of the pastels to build up my breeding stock and when it came time for the March show in 2013, there was a pastel male which was darker than the others and one of the normal males, so I decided I would take those to the show to sell. When we were packing for the show we had another two pastels which we were taking up for a friend, and when I saw them and compared them to mine I thought to myself, “wow, those pastels are ugly – just look at my pastels!” Unfortunately I could not attend the show myself but two of my friends went up for me. I started getting calls from people that were at the show asking what Ball Pythons are those and why are you selling them at a normal price, as those are definitely not a normal and a pastel. I didn’t think much of it and took it as a compliment as they were such pretty babies.

After that show I had numerous people contact me to tell me that I could have something special there and I mustn’t sell anymore. From then on I started looking into these babies more carefully and looking at other animals and I started seeing how different they were. Over time as they grew and shed out they just got prettier with age, the pastel colouring got better and their blushing increased. Confident that I had the same adult pair that made these babies I was looking forward to the next season to do the same pairing. The next season came and I repeated the pairing, got another 8 eggs but this time when they hatched I got only two pastels and 6 normal, and to top it off they were all normal-normal and normal-pastels, no special gene showing through at all! So now I started thinking this could possibly be a once off thing. The next season came we did the same pairing and we got the same result: all just normal-normals and normal-pastels.

At this stage the female Pastel Bingo that we bred out in 2012 was growing fast and was over a kilogram in weight, so we thought we would give her a go at breeding. We paired her special brother with her but saw no locks, so we quickly put her with her pastel father and we saw a lock. On the 1st of January 2015 we got 5 eggs from our Pastel Bingo, 4 of which were fertile. The exciting thing is that her special traits have proven genetic, as we got one normal, one normal looking pastel, one Pastel Bingo and one Super Pastel Bingo with the clear characteristics of the special gene showing through. At the moment we believe it is a dominant morph but with more breeding we will find out if it could possibly be a co-dominant morph (have a super form). We have decided to name this new Ball Python morph the Bingo Ball Python.

As you will see, behind the head there is a Y-shaped marking, they also have a significant tail stripe and neck stripe and the patterning is very irregular through their body. In the Pastel Bingo, the blushing is clear on the head and throughout the rest of the body. The yellow colouring that we see in pastels is also intensified, making it a much more striking animal. I hope these pictures in this article do them justice, we didn’t get have the time to take some professional pictures which we will do soon and publish them, but I am sure these pictures can give you an idea of just how special this morph is. All round what this new morph has proved is that if it can make a simple co-dominant morph look this amazing, then what can it do to other morphs? Time will tell and we can’t wait to see! 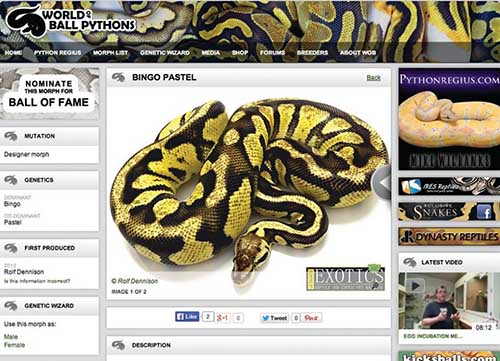 Here is the link to the Bingo Pall Python which has been listed on worldofballpythons.com – BINGO BALL PYTHON