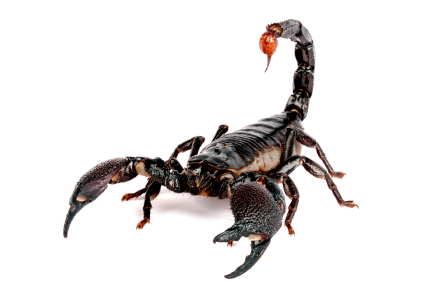 Posted at 14:49h in Arachnids, Blog by editor 0 Comments
0 Likes 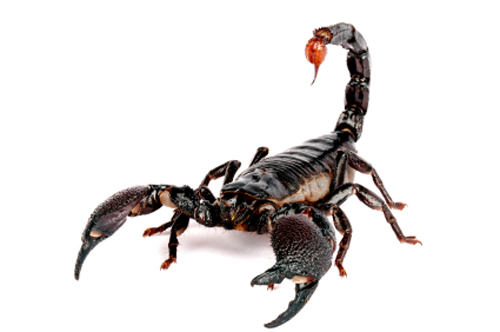 Emporer Scorpions (Pandinus imperator) are from West Africa. They live and thrive in hot, humid regions. Not aggressive. Sting hurts, but venom is generally harmless. A lot of people keep them as “pets.”

There are few species of scorpion that are more impressive than the Emperor Scorpion. These animals can do well in captivity and one of the joys of keeping them is that you can also breed them. The captive reproduction of Emperor Scorpions is a most interesting endeavour (for hobbyists and, I imagine, the scorpions themselves!). When properly housed and cared for, Emperor Scorpions are relatively easy to breed. This is surprising, given that they are such unique
and highly specialized creatures, and is an opportunity that should not be missed. Many prominent invertebrate specialists started out with this species. Keeping them is a wonderful way of becoming involved in invertebrate husbandry, and will almost certainly “hook” you for good.

Distinguishing the Sexes
Adult females are longer and stouter than males, but this is not a reliable means of distinguishing the sexes.There are some slight differences in the shape of the genital openings. View the scorpions from below, in a clear plastic box, when attempting to sex in this manner – do not restrain them via hand or tongs. You can see the photos of the undersides of male and female Emperor Scorpions accompanying this article.

Courtship and Mating
In captivity, as within certain parts of the natural range, mating may occur during any month. Reproduction is most likely to occur if your scorpions are housed in a large terrarium that provides ample burrowing opportunities. All species studied thus far perform a “mating dance”, with the pair locking claws and moving about. It is theorized that this helps to clear a patch of ground for the deposition of the males’ sperm packet. I imagine, but have not been able to determine for sure, that the specific dance “moves” also aid in species’ recognition among these nearly blind creatures (this is the case in “dancing” scorpion relatives, such as jumping spiders).

The male deposits a sperm packet on the ground and pulls the female over it (it is tempting here to draw analogies to salamander reproduction). Hooks along the edges of the sperm packet latch onto the female’s genital opening, and the eggs are then fertilized internally. 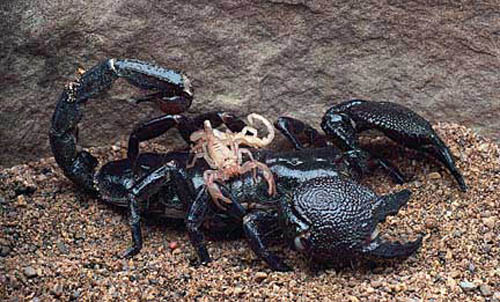 Gestation and Birth
Gestation is highly variable, ranging from 7-10 months on average but sometimes exceeding 1 year. It is likely that stress, temperature and other factors play a role in determining the length of the gestation period. Females continue to feed while gravid, and may swell noticeably. When viewed from above, the carapace segments appear widely spaced, and seem ready to split apart Ivory Ornamental (Poecilotheria subfusca) (heavily-fed scorpions of either sex,
however, may also appear gravid). The young (sometimes called “scorplings”), 8-30 in number, are born alive and measure about 5mm in length. They are white in colour and remain on the female’s back until their first moult, at which time they darken and begin to venture off on their own. Once this occurs, they will readily accept (1cm) crickets, small waxworms, newly moulted mealworms, wild-caught insects, and canned silkworms.

Maternal Care of the Young
Female Emperor Scorpions feed their young with finely-shredded insects – this really is something to see. By all means, try to do so by viewing yours at night with the aid of an incandescent “nocturnal” bulb. The degree of care they provide to their young is extraordinary, and is far greater than one might expect from such supposedly “primitive” creatures. Even among those scorpions that exhibit social behaviour, Emperors stand out as being very advanced in this regard.

Caring for the Mother and Her Brood Once the female has given birth, all other scorpions should be removed from the terrarium, as she will become highly aggressive and defensive. Do not relocate the mother as this inevitably stresses her and may cause her to consume her young.

Females with young react aggressively to any disturbance, even occasionally grabbing and eating scorplings that become dislodged from their backs. This is not an uncommon occurrence – do not remove the remaining young unless she begins eating them regularly, as the overall survival rate is improved when clutches are reared with their mother. I have raised several clutches to adulthood with the mother present – the key lies in disturbing her as little as possible and in providing a deep, secure burrow.

I usually raise the terrarium’s temperature to 29 – 32°C when rearing young Emperor Scorpions – this may not be essential, but I have found it to work well. Sexual maturity in the wild is reportedly reached in 4-7 years, but captives may breed when only 12-14 months of age. Emperor Scorpions under my care have reproduced at age 3 and 4 years. 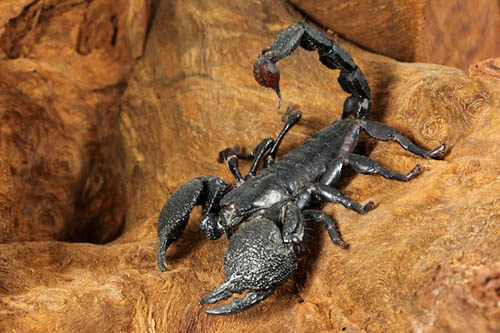