House Snakes and Their Mutations (Morphs). By Rolf Dennison 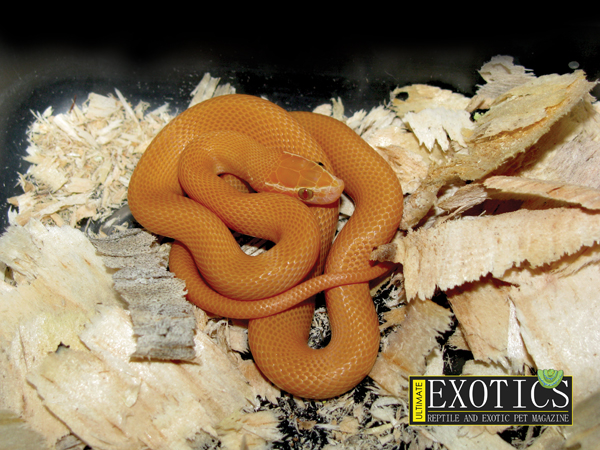 17 Aug House Snakes and Their Mutations (Morphs). By Rolf Dennison

House snakes for a long time have been a favourite amongst South African snake enthusiasts and reptile keepers. I am sure many of us at some stage have kept a House Snake that they have caught, or a friend has caught in the garden. I am also sure that this specie of snake is responsible for sparking the initial interest in many snake keepers which has resulting to them getting ‘hooked’ into the hobby of snake keeping and breeding.

Due to our fascination in mutations, and the reason for the mutations being rare and of higher value it sparks interest in many breeders and keepers of snakes. There will of coarse always be the other snake keepers who prefer the wild type of any species and are not a fan of mutations. That being said those of us with the fascination of mutations must never forget the natural beauty of the ‘wild type’ but at the same time we can also appreciate a colour mutation, which we can then selectively breed out in order to produce more of that mutation. A good example of this is the American Corn Snake, which now has 100’s of different morphs and new morphs being developed and bred all the time.

Let us go through the mutations and colour varieties that are currently being bred. What I have noticed is that with each mutation there can be quite a variety of different patterns and colour variation out of one clutch. This can confuse some breeders if they are unsure of the adult’s genetics. Below we will run through the mutations. These may not be all the existing mutations, but these are most of the known mutations, which I and other breeders have been working with in South Africa and have bred.

Albino – the colloquially name for Amelaistic

There are two different types of albino mutation in House Snakes. The T – Albino and the T+ Albino. 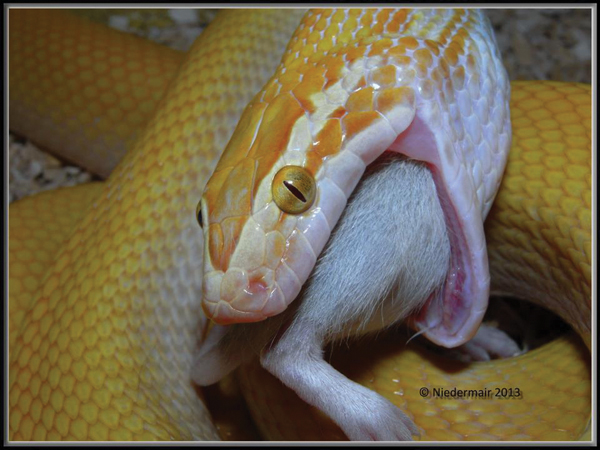 T+ Albino is a recessive trait. The “T” in T+ Albino represents tyrosinase, an enzyme required in the synthesis of melanin (dark pigment). T+ Albinos have functional tyrosinase enzymes required to synthesize melanin, but they lack a subsequent enzyme required to complete the melanin-synthesis process. Simply put, T+ Albinos generally exhibits darker pigments, of yellow and orange and most importantly have a black pupil. After dealing with the T+ Albino for a few years it is also important to point out that as babies their pupil is a dark ruby red colour and as they mature their pupil darkens until it is black. We also see this with the T+Hybinos and the Hypo T+Butter babies. 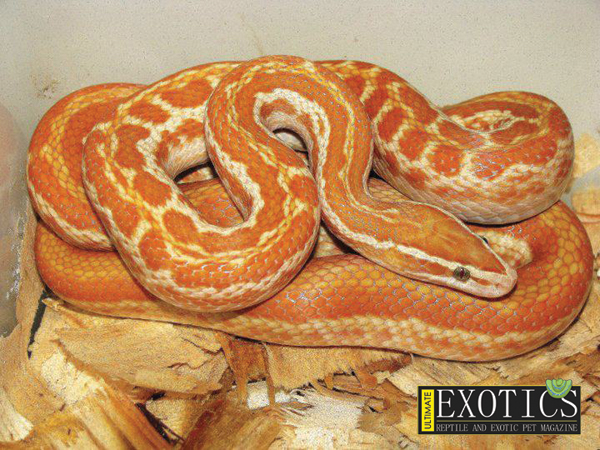 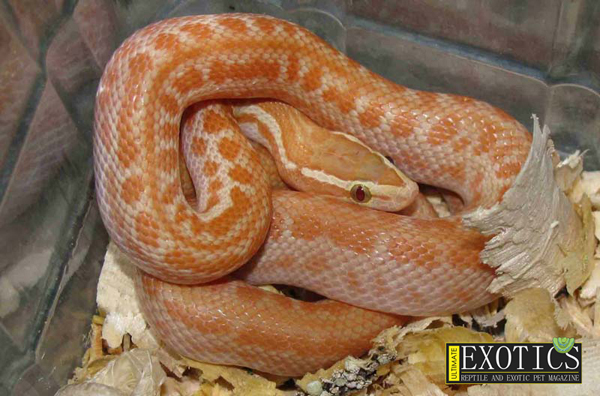 T- Albino is also a recessive trait, and this is the classical albino we all know which has no tyrosine and has no dark pigment (melanin). This results in a House Snake, showing a yellow, orange and white colouring and their pupil is red. House Snake being nocturnal have a vertical pupil, which only appears as a tiny vertical slit during the day, this makes it hard to see the colour of the pupil. In a dark room or at night you will see the pupil is dilated and will clearly be red. Depending on locality of the snakes the orange and yellow can vary greatly with the different shades of brown in the wild types. On the more red varieties the orange can be very bright almost going towards pink. 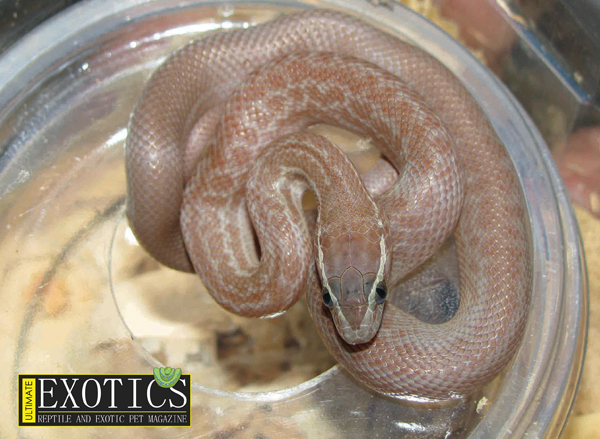 This mutation results in a lack of the pigment cells producing melanin, which results in a paler, more dilute animal. This mutation has been proven to be a recessive mutation and has been bred with T+Albino and more recently Green House Snakes as described above. 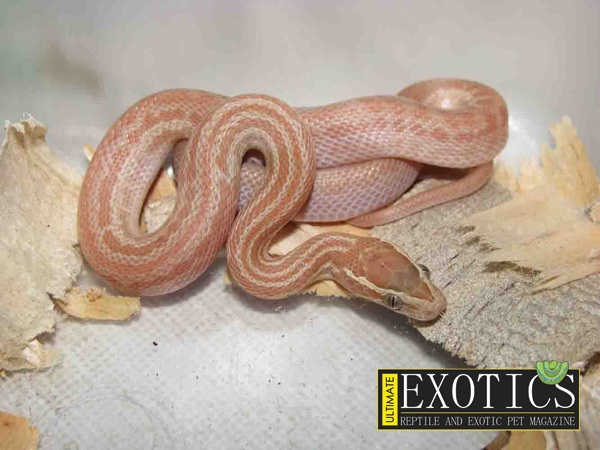 The T-Butter House Snakes were first produced in 2012 by Rolf Dennison from Ultimate Exotics. The T-Butter results in a snake showing an intense yellow or orange colouring with ideally almost no pattern whatsoever with red pupils. 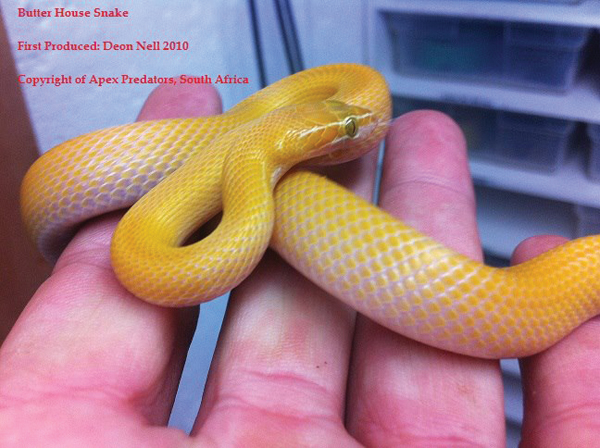 The T+ Butters were first produced in 2010 by Deon Nell. Results in a snake showing an intense yellow or mustard yellow colouring with ideally no pattern whatsoever with a black pupil. 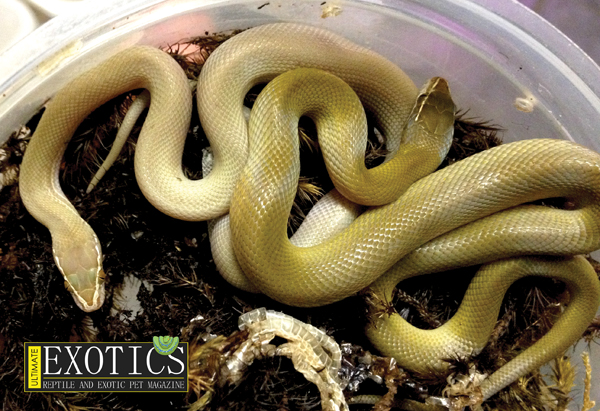 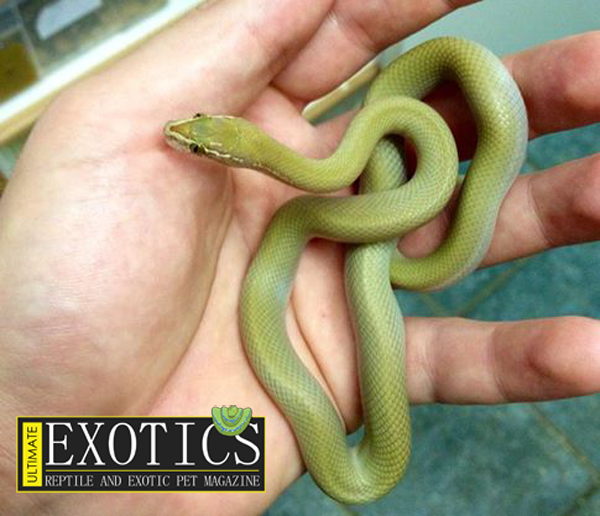 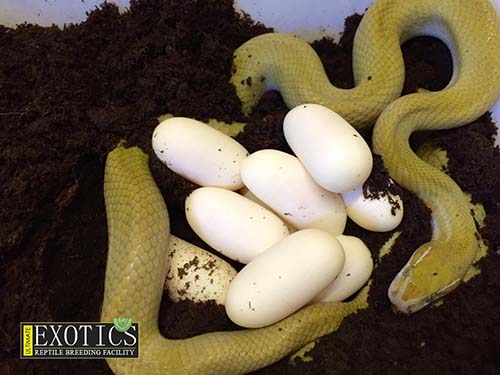 A world first at Ultimate Exotics! The first ever Hypo Green House snake to lay eggs! In the past we have only bred Hypo Greens from Green het Hypo pairs. October 2015

Hypomelanistic Green House Snake. This was produced for the first time in 2013 by Rolf Dennison and has resulted in a dilute green house snake with almost no pattern. 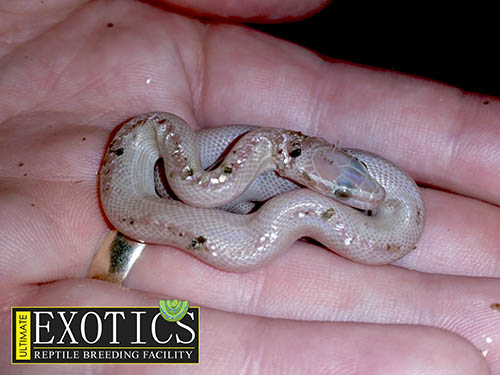 Hypo T+ Butter House Snake. This was produced for the first time in 2016 by Rolf Dennison from Ultimate Exotics and has resulted in a dilute T+ Butter house snake with almost no pattern. This was created by breeding Hypo Greens to T+ Butters and then breeding the Green House Snake Double het babies back to each other.

There are a number of different colour varieties of house snakes and this generally comes down to locality and species. Most are just different shades of brown, but there are two distinct colour varieties being bred at the moment, the red and green. 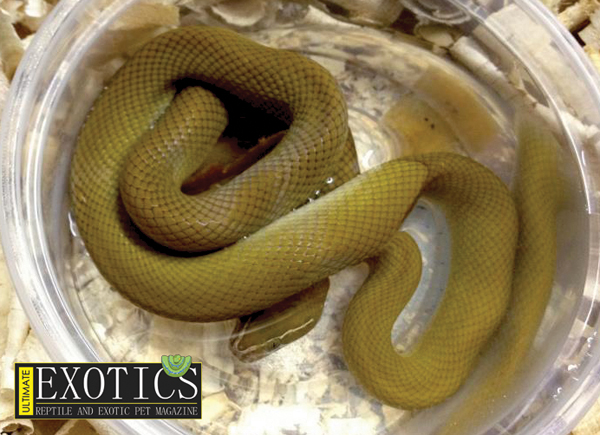 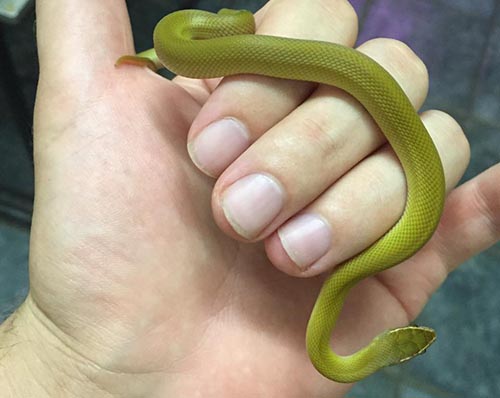 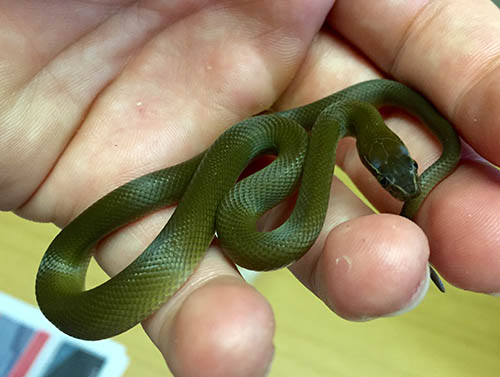 These House Snakes are said to come from Zambia, and have distinct Olive Green colours with hints of brown. They have almost no pattern with an eye stripe on each side of their head. The green colour can vary in individuals as you can see in the pictures above and depending on how close the animal is to shed. Babies are also born very dark and as they grow their green colour gets brighter. There are now albino mutations and hypomelanistic mutations of the Green House Snake. 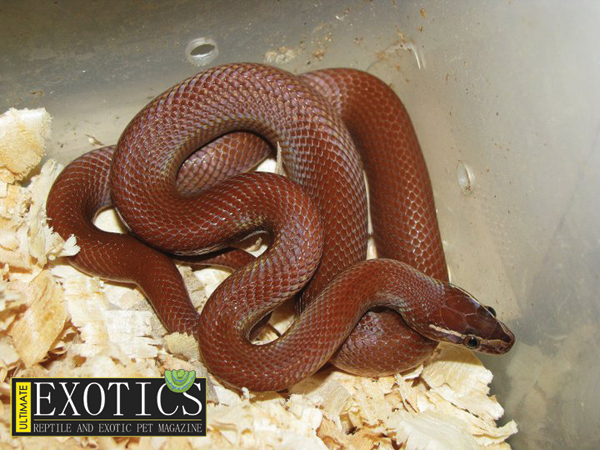 These House Snakes are found in South Africa in parts where the soil is very red, hence the adaption of the red colouring in order to blend in with their natural habitat. I have seen pictures of T-Albinos mutations of this colour variety which are very orange and even pinkish with very little pattern.

Other House Snake Morphs and Mutations 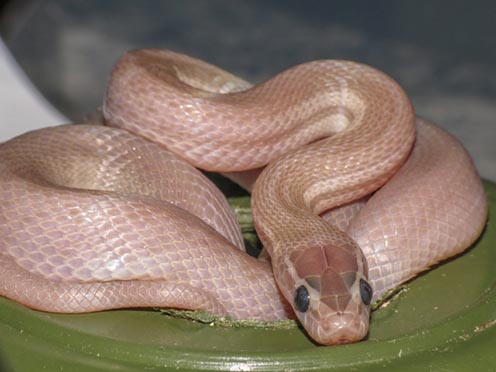 This Blue-eyed House Snake was a wild caught animal that was owned by Dean Boshoff. This animal unfortunately died. I have recently heard that there was another one found and it has been bred to normals. I cannot wait to see this mutation in the near future! 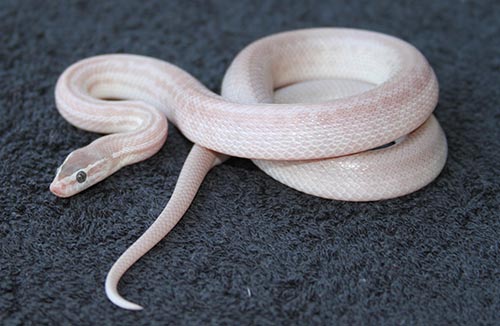 This mutation has now been established in captivity and was proved out by Chris Jones in 2015. This mutation was first called a Blue-eyed Leucistic as the adults look very similar to other leucistic mutations that we see in other colubrids. Since more of this mutation has been bred breeders have notices the babies hatch out like a very light hypo house snake and as they grow and shed they get whiter and whiter. Even as adults they never go a pure white colour and you can still see their faded patterns like you can see in the picture above. If this was a true Blue-eyed Leucistic mutation you would expect the babies to hatch out pure white with no pattern and blue eyes and look the same as they grow into adults. 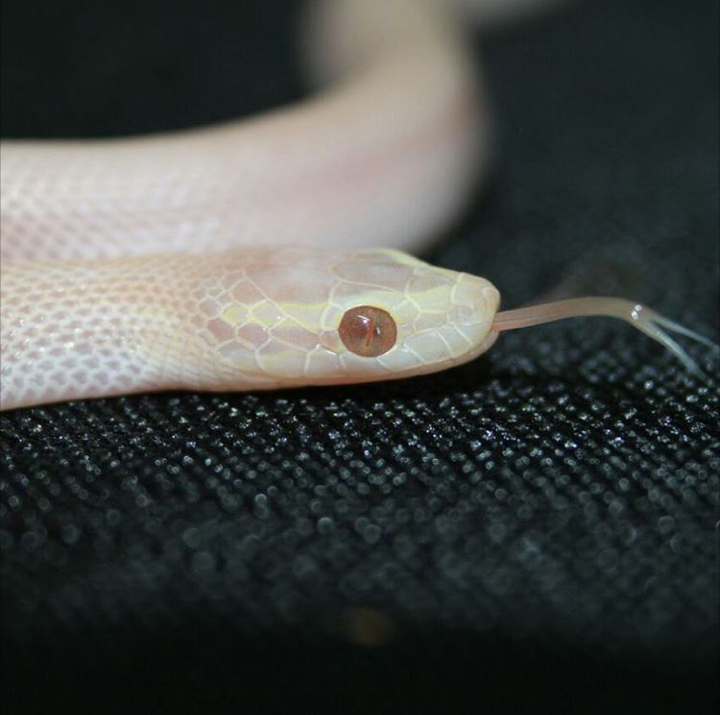 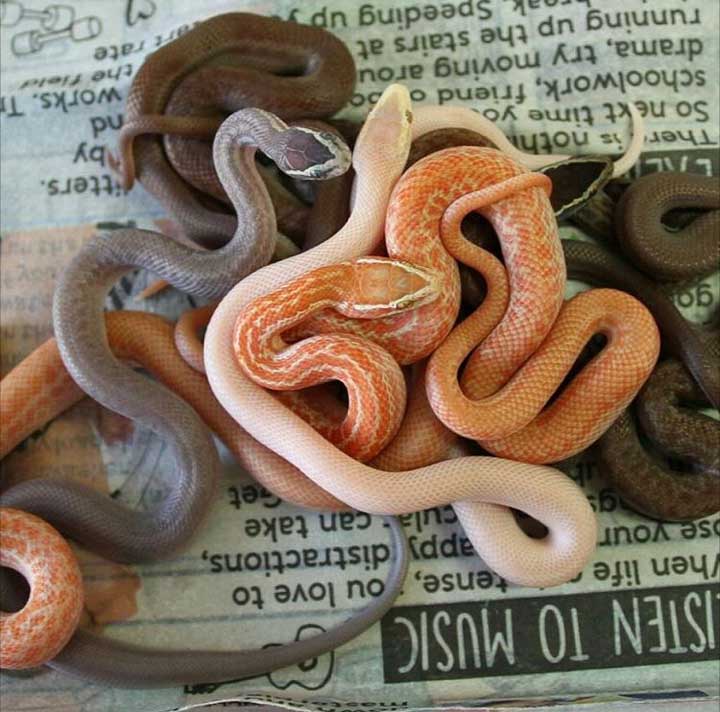 T- Albino Blue-eyed House Snake in the middle. Left is the Blue-eye mutation as a hatchling. Bred by John Chinn from Ditalo Reptiles 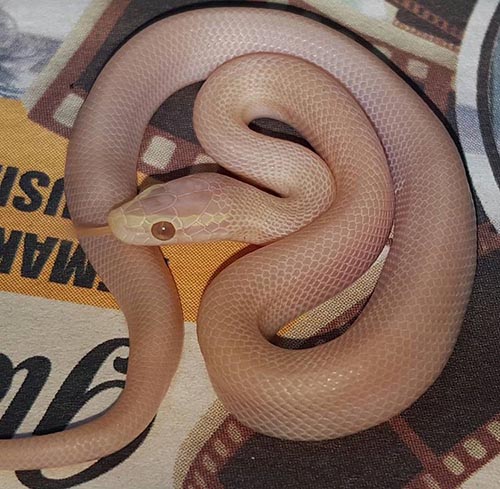 This is a double recessive combo of the T-Albino mutation and the Blue-eyed mutation! This was first bred in 2016 by John Chinn from Ditalo Reptiles. 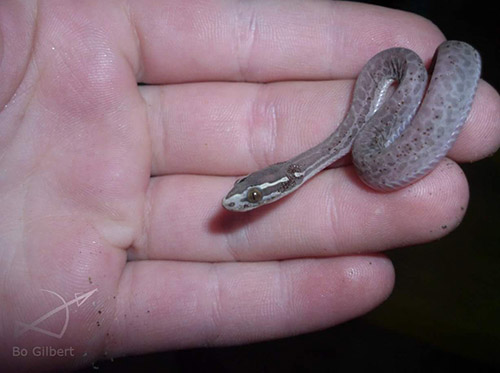 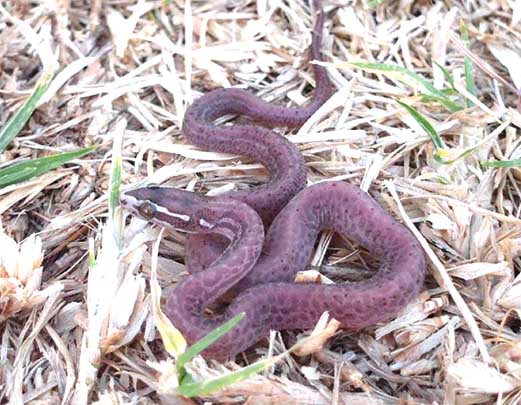 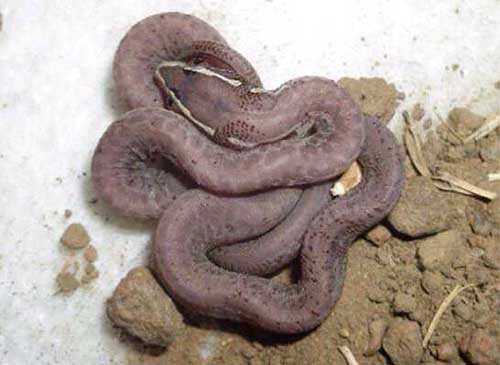 We saw this on one of our local groups. We are not sure who has this animal, it looks to be the same recessive ‘scaleless’ mutation that we see in Corn Snakes. 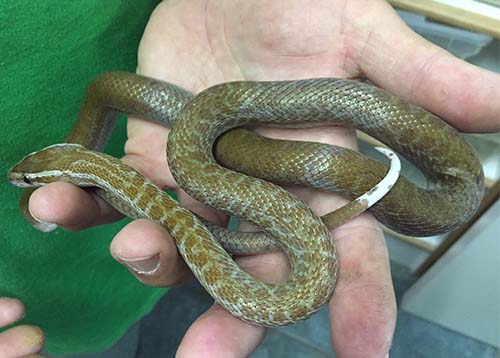 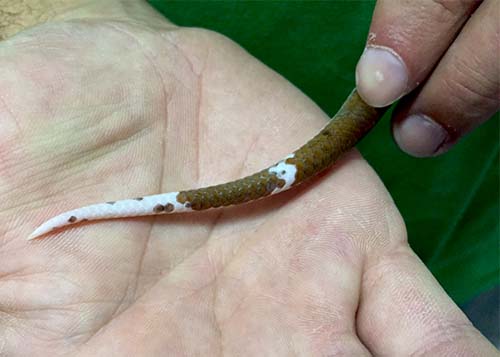 A close-up of the tail showing the Pied markings. Owned by Byron Zimmerman

This Pied House Snake was a wild caught animal caught by Byron Zimmerman. He bred this male to a normal female and held back all the baby females. He later bred this Pied male to one of his daughters and did get one baby with a few white scales on it’s tail, showing it is a recessive mutation. Unfortunately the baby did not make it. More breeding will prove how this Pied mutation will work and hopefully we will see a House Snake with allot of white patches on it’s body which will look impressive! 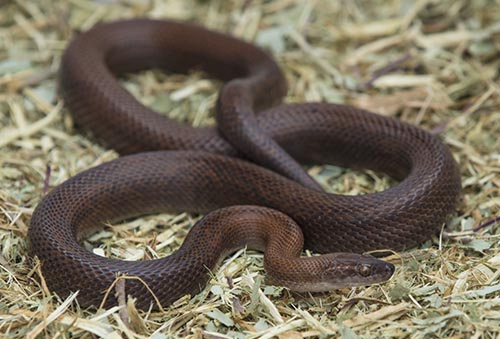 This unusual house snake we recently required and pictures barley do it any justice. It is a beautiful coffee brown colour with black speckling all over it’s body. We hope we can prove this morph to be genetic. 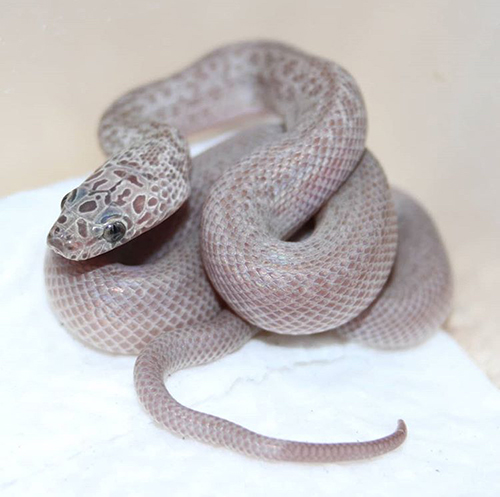 This cool looking House Snake has an unusually light colour. What makes it so special is the unusual patterning on it’s head which is very broken up giving it a marbled appearance. This baby was produced by our friend Chris Jones in 2019 and two babies came out looking like this. Hopefully it proves out to be a genetic trait, time will tell!

Patterns also vary between different House Snake localities and even in specific locality clutches you can get an amazing variety of pattern between individuals. Patterns can vary from stripes to zigzags to blotches of white and some individuals can have both. The KZN house Snakes seem to have the boldest markings. 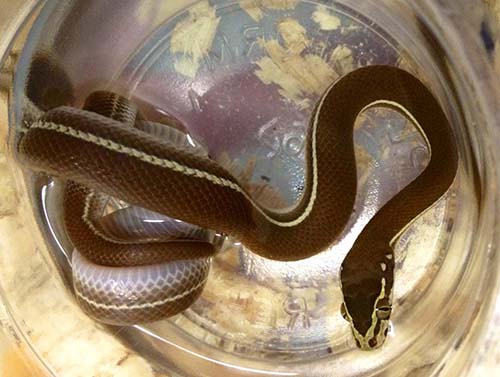 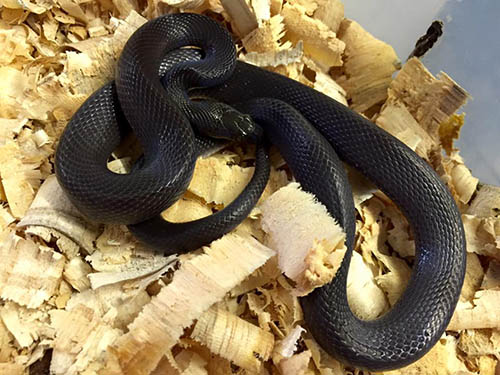 Due to the huge variety of house snakes one mutation such as the albino mutation can also vary greatly as it is bred into other locality specimens. I am looking forward to seeing what mutation we will start seeing in the next 10 years or so!