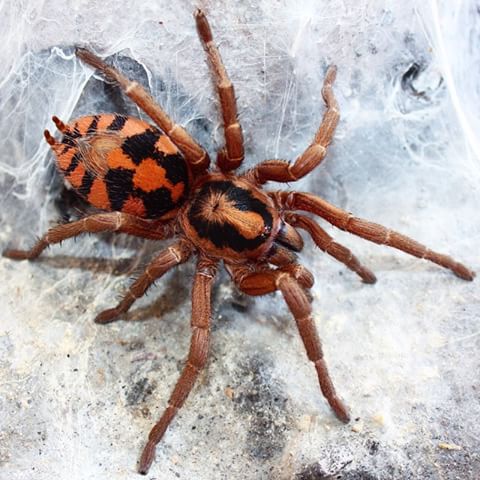 Posted at 09:12h in Arachnids by editor 0 Comments
5 Likes 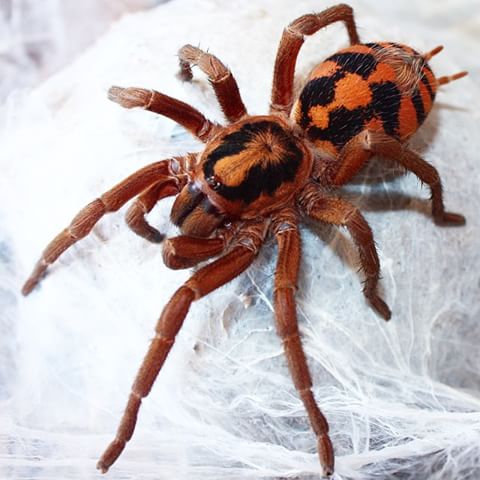 The Pumpkin Patch Tarantula is classified as a dwarf tarantula and is one cute little spider, it appears to have a few pumpkins tattooed on its abdomen. When they first emerged on the South African market around 6 years ago they often sold at around R1200 each. Fortunately a few local egg-sacs have brought the price down considerably.

There is a lot of controversy over the scientific name of this little beauty. When initially sold in South Africa and America, they were sold as Hapalopus formosus. This confusion may have arisen over a picture posted by Rick West of a H. formosus, which resembled the Pumpkin Patch we have in the hobby. There are, however, actually 2 distinct species of the Pumpkin Patch. None of these are believed to be true Hapalopus formosus; which actually more closely resemble the H. triseriatus.

The Germans, who first bred them, have usually named them Hapalopus sp Colombia (gros) meaning large and Hapalopus sp Colombia (klein) meaning small. There is a noticeable difference in size between the 2 species. While the small variant usually only grows to around a maximum of 7-8 cm, the large variant has been recorded by an American keeper at just under 12cm. That’s a huge difference. At almost 12 cm that is quite a big “dwarf tarantula”

While it’s great to acknowledge that there are potentially 2 separate species, because these were originally sold as one species (H. formosus) they will more than likely have been inter-bred several times. These hybrids would possibly now be separated by size alone and it is highly unlikely that we have any pure specimens in the hobby over here. I have only rarely ever seen an adult female over 10cm in size and most adult specimens are usually over the 7cm mark as well. This would seem to indicate that there has been a fair amount of hybridisation, with many sizes being an average of the 2 species.

The Canadian keepers, many of which are fanatical about purity in the hobby, are believed to have kept the 2 species separated. Some maintain that there are visual differences between the 2 species. The true “large” variant apparently can be distinguished, as the “pumpkins” are joined together, while the small variant will have separate “pumpkins” visible. This is however also controversial, with some keepers not being in agreement. I have seen both of these patterns, as well as a pattern that seems to be a mix of the two, with only a thin line joining the “pumpkins”. It’s going to take a wiser man than me to try and sort out this classification and I look forward to reading the debates on this issue. 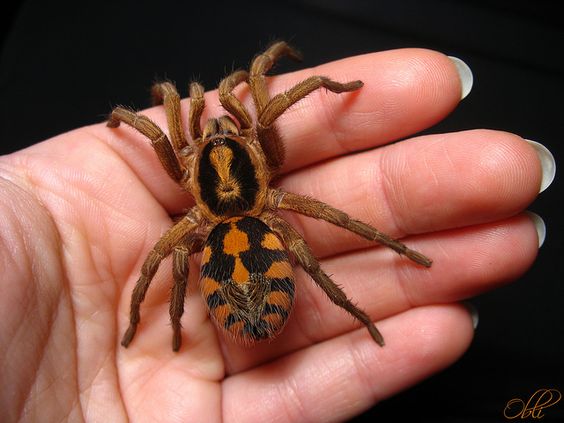 The Pumpkin Patch is, however, less controversial when encountered in real life. Often a shy, nervous little spider, they will rarely bite. They usually prefer to make a hasty retreat. Emphasis should be placed on “hasty”, as they are able to reach explosive speeds (around the sound barrier, I’m sure) in a second flat. Care should be taken when feeding or rehousing as they are easily spooked; this is not a good combination.

The Pumpkin Patch is a hardy little fellow and they are easy to keep as long as you have small enough feeder insects to feed the slings. Being a dwarf tarantula, the 2nd instar slings are tiny, often measuring less than 5mm in total outstretched size. Newly born Pin-head crickets or Pallid roach nymphs are the easiest to feed and are eagerly taken. Despite their small size, they are aggressive feeders and will often take on an insect bigger than themselves.

They often spin quite impressive webs and make really good display spiders. Larger spiders will not usually burrow and will often be seen “out on the prowl” or can be seen “just chillin’” out in the open. Possibly, hoping to be overlooked as a mini pumpkin patch.

Care is similar to most ground dwelling spiders. A good humidity can be maintained by spraying the enclosure once a week and keeping the substrate slightly moist. Allowing the substrate to dry out before wetting again helps to break the cycle of moulds, funguses and several parasites. Good ventilation also helps to reduce mould, but you may then need to add an extra spray a week to keep the humidity up in the enclosure, especially in the dryer areas of the country.

Spraying the web once a week supplies sufficient water for smaller slings, but as they grow a small water bowl is advised.

These spiders usually breed easily without any special manipulation of temperature or humidity. Females are often very tolerant of the smaller males during mating. Relatively large egg-sacs are produced for their size and these often house over 500 tiny eggs. The survival rate to second instar is usually very good if the egg-sacs are properly cared for.

The Pumpkin Patch is great little spider that is suitable for beginners and advanced keepers alike and deserves a place in any tarantula collection.

The Pumpkin Patch Tarantula is classified as a dwarf tarantula and is one cute little spider, it appears to have a few pumpkins tattooed on its abdomen.