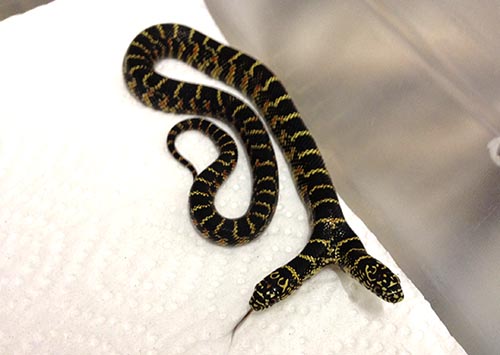 Early January is the time of the year when our colubrids are all starting to hatch. Each morning we go through the incubator and check to see if anything has hatched and whatever snakes have hatched we then remove them into a separate container where they can shed. One morning this year, as I was checking on the eggs, I noticed a Florida Kingsnake clutch that had hatched. Excited as always, I opened the lid to inspect the babies and for a second I thought I was seeing double! I noticed two heads but only one snake! I couldn’t believe my eyes as it took a few minutes for me to realise it was a double-headed snake! Although this is not something we would recommend breeding with as it is not a recessive mutation, it is still an amazing sight and we really hope this little guy can eat and survive. Due to all this excitement we thought it was a good time to do a short article on two-headed snakes so we can understand a bit more about them.

Two-headed Florida Kingsnake that was bred at Ultimate Exotics.

Polycephaly is the condition of having more than one head. Bicephalism is a condition of having two heads. Although not common throughout the animal kingdom, there are cases of animals and even people being born with two heads. Two-headed animals form by the same process as conjoined twins: they all result from the fusion of monozygotic twin embryos. Bicephalic animals, due to their rarity, are a subject of novelty. In my personal opinion you can’t put a price on them and if they survive they should be carefully cared for as a pet and nothing else. Its occurrence is said to be one in every 100,000. Snakes seem to have a better survival rate than other bicephalic animals. Two-headed snakes have been documented to live as long as 20 years in captivity. With two different brains giving commands to one body, it must be a confusing existence.

Each head of a two-headed snake has its own brain, and they somehow share control of the organs and body, though the specific structure of the connections varies. Animals often move in a disoriented and dizzy fashion, with the brains “arguing” with each other; some animals simply zig-zag without getting anywhere. The snake’s heads may attack and even attempt to swallow each other, which can be a problem. As you can imagine, two-headed animals survive poorly in the wild and don’t live very long. I must say, our little two-headed Florida King moves with very little trouble and its movement seems normal, it almost seems as though one head is controlling the movement of the body and the other head is almost parasitic.

Most two-headed snakes only live for a few months, though some have been reported to live a full life and have even reproduced, with the offspring born normal. A two-headed black Rat Snake with separate throats and stomachs survived for 20 years. A two-headed albino Rat Snake named “We” survived in captivity for 8 years.

Medusa is an Albino Honduran Milk Snake in the United States that is most probably the most well-known two-headed Snake. Sunshine Serpents, who bred the snake, decided to offer the snake for sale. Based on reported past sales of other two-headed snakes, the value of this snake could be in the five or even six figures. “In my opinion, this is the most beautiful two-headed snake to ever exist,” said Parker. “Not only is it insanely colourful, but the two heads are perfectly formed. The snake appears to be very healthy,” Parker added. Sunshine Serpents will take offers for the snake starting at $25,000. I am not too sure what the snake ended selling for but it seems like quite a hefty price tag! It must only be a serious wealthy collector who would purchase a two-headed snake, as it has no breeding value. 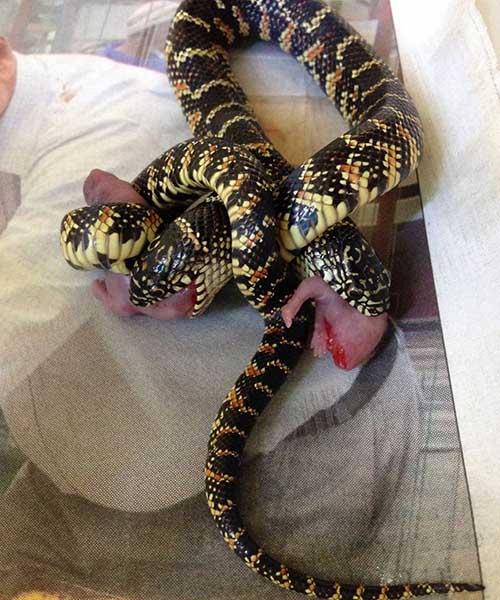 Our Two-headed Florida Kingsnake having their 3rd and 4th meal! The first two meals the right head ate, and now this time the right head bit and ate first as usual and then we offered a pinky to the left head and it bit and ate as well! It has also shed 4 times already and we checked and they’re a girl! I can’t believe they both decided to eat their pinky backwards, typical Kingsnake!

Medusa, like our little Florida Kingsnake, has two-heads who have independent thoughts and are each able to control the length of the shared body. This is caused by an incomplete splitting of monozygotic twins. Wild two-headed snakes don’t usually live very long, but they can do just fine in captivity as long as they are properly cared for and are able to eat and digest their food. It’s impossible to know how each brain interprets the other head. While it seems like they would get fairly used to one another, they still don’t have the realization that it’s okay for one snake to eat, because the nutrients will be shared. Each brain gets the hunger signal, and each decides they want to go for food. If one side has food and the other doesn’t, the two may begin to fight over it.

We hope that this article has given you a better understanding of this weird and unusual condition that we see in snakes. I am sure there are bunch of people who hate the idea of a two-headed snake, but I think no person who appreciates snakes can hate them. As I mentioned, this is not a mutation and can not be bred out, but I think it is only fair to give them a chance in a comfortable captive environment and I think they can make a great mascot and create a lot of interest in keeping snakes in captivity around the world.