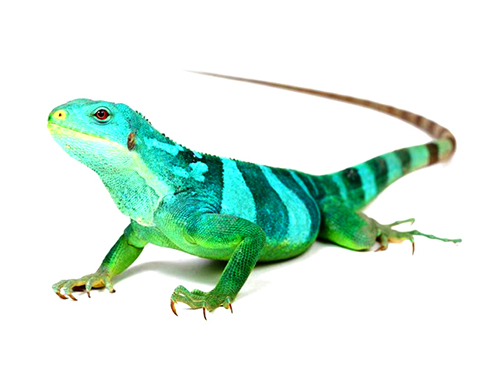 The Fiji banded iguana (Brachylophus fasciatus) is an arboreal (Tree dwelling) lizard found mainly on the south-eastern islands of Fiji. There are also a few other isolated populations that were probably introduced by man, Vanuatu being the most famous. It is one of the few species of iguanas found outside of the New World (North and South America and surrounding islands) and one of the most isolated members of the family Iguanidae. Wild populations of these incredible lizards are decreasing at a rapid rate, mainly due to habitat destruction. Animals that have been introduced to these islands by man, such as goats, cats, mongoose and rats, have also had a devastating effect on both the lizards and their eggs. Deforestation, capture for the pet trade, and being hunted for food, have also played a role. There are believed to be fewer than 10 000 animals left in the wild.

They are considerably smaller than the Green Iguana (Iguana iguana) commonly kept in South Africa as pets; Fiji’s usually only reach around 60-75cm (snout to tip of tail). This may partially explain the demand for them in the pet trade, as they are much easier to accommodate than larger iguanas. Their attractive colouration and often sweet natures make them irresistible.

These Iguanas are unusual in many ways: they are sexually dimorphic, only males have the bands that give them their name. Their skins are also light sensitive and they can lighten or darken their colouration, allowing them to blend in to their surroundings almost like chameleons. Populations from the islands also have slight differences in appearance. Some islands’ iguanas are larger than others and the size of the crests and heads have also been reported to differ among the various islands. These findings may require further investigation and possible re-classification.

Fiji Banded Iguanas are active during the day (diurnal), feeding and basking by day and retreating to the treetops at night. They are considered a national treasure by the Fiji government and they are often displayed on stamps and even currency. The iguanas are even considered sacred by some tribes on the islands.

It is not certain how these iguanas ended up so far away from their cousins in the New World. Some speculate that they evolved from now extinct old world iguanas, but no fossil evidence supports this. It is more likely that they were carried to remote islands on rafts of vegetation during storms or floods.

Many biologists and researchers consider Fiji Banded Iguanas to be herbivorous (only eating plants) but they are most certainly omnivorous (eating plant and animal matter). Many have been observed eating insects in the wild, and mine will immediately consume crickets or roaches that have been placed in their cages. Younger lizards and gravid females are especially fond of insects. They are not usually fussy eaters and will consume many different plants, vegetables, insects, and fruits.

As with the Green Iguana, it is important to provide a wide selection of edible leaves as these make up the bulk of their diet, usually around 70%. I try to feed at least 3 different types of leaves each day and 2 different vegetables (30%). Mulberry leaves, hibiscus leaves and flowers, watercress, swiss chard (incorrectly called spinach in South Africa), bok and pak choi, nasturtium leaves and flowers, turnip and beetroot leaves, collard greens, dandelions, thistles, and almost all other edible leaves are eaten. Regular lettuce and cabbage as well as any strong tasting or smelling herbs should rather be avoided or fed in small quantities. By feeding different greens you ensure that all nutritional needs are met with minimum supplementation. Feeding a variety of different food items also lessens the risk of your animals taking in high quantities of certain vitamins and minerals (for example Vitamin A, which can be toxic in high doses).

Vegetables should make up around 30% of their “salad mix”. I slice my veggies with a peeler or grate them; this makes it easier for them to eat. Butternut, gems, patty pans and baby marrow are often favorites. Again it is best to avoid the stronger tasting vegies, such as turnips or those that spoil quickly. I lightly dust greens with a good calcium, vitamin and mineral powder every day and sprinkle Avi-Plus parrot hand rearing powder over their food once a week. I have found this combination keeps Fiji iguanas in top condition, especially during the breeding season, when the females take a massive amount of strain. Fruits are eaten in their natural habitat and can also be offered but due to a high sugar content, they should not be fed in excess. Animals kept in captivity are less active and are prone to obesity. As with most animals, avocados should be avoided.

I feed insects once or twice a week during breeding season. I usually feed various roaches and occasionally silkworms and crickets. I believe that insects form an important part of their diets, especially during breeding season when the females need additional nutrition. Once I started feeding the baby iguanas insects, I noticed an almost immediate improvement in growth rate as well as overall condition.

Fiji Banded Iguanas can be housed in various enclosures. Their housing requirements are very similar to the normal Green Iguanas, but obviously smaller for adult animals. I bred a pair in a wooden enclosure that measured 2.4m by 1m. I used a 1,2m, 5.0 UVB tube and provided a basking spot on one end of the enclosure. Day-time temperatures would typically range from around 28-35°C and never lower than 15°C at night. Temperatures in Fiji seldom reach above 35°C or drop below 15.

Enclosures need good ventilation and a high humidity of around 70-90%. Fresh water needs to be provided daily and enclosures need to be kept clean. As with most of my lizards I have found that the best and easiest substrate to use is washed river pebbles, too small for feeder insects to hide under but big enough so as not to be accidentally ingested. This substrate is hygienic, attractive and safe and easy to maintain.

These iguanas have successfully been bred in captivity for many years, with the San Diego Zoo apparently having bred over 100 animals since 1965. Adult pairs can be housed together permanently and aggression is rare. As with most lizards, housing more than one male in an enclosure is not advisable. I managed to breed them without any special conditions being met. Temperatures in Fiji are very similar for all seasons and although there is a rainy season, it often rains all year round. It seems as if no special temperature or humidity manipulations are necessary to induce breeding. A slight increase in humidity may be beneficial though.

In the wild, females usually lay between 2-7 large eggs, usually only once a year. In captivity and with optimal conditions I have had 3 clutches in a season, ranging from 3-7 eggs. Incubation is a lengthy process and is often where things may go wrong for breeders. Eggs usually hatch between 120 and 150 days at an incubation temperature of 29°C. There has been a lot of speculation around the role that temperature plays in sex determination of these lizards but due to the complexity, this will have to be addressed in another article.

The hatchlings usually emerge at a decent size at just under 10cm. One of mine hatched out at 11cm. They are active and males can already be distinguished from females by light bands. The hatchlings usually start feeding 2-3 days after emerging. They can be kept under the same conditions as the adults but enclosures and water bowls should be cleaned on a daily basis.

I would love to see these magnificent lizards become more readily available in South Africa, but due to their endangered and protected status (CITES Appendix 1) this is unlikely in the near future. There are a few pairs in the hands of breeders in South Africa and we can only hope that they will be successfully bred. Due to current prices and availability they are however only a dream for most keepers, but what an amazing dream it is. 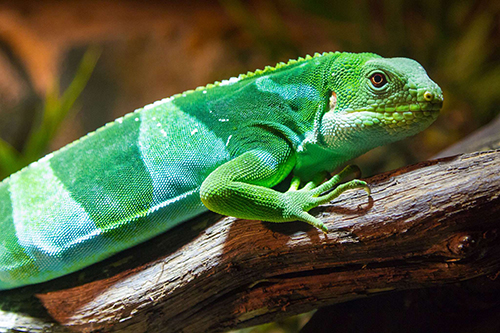