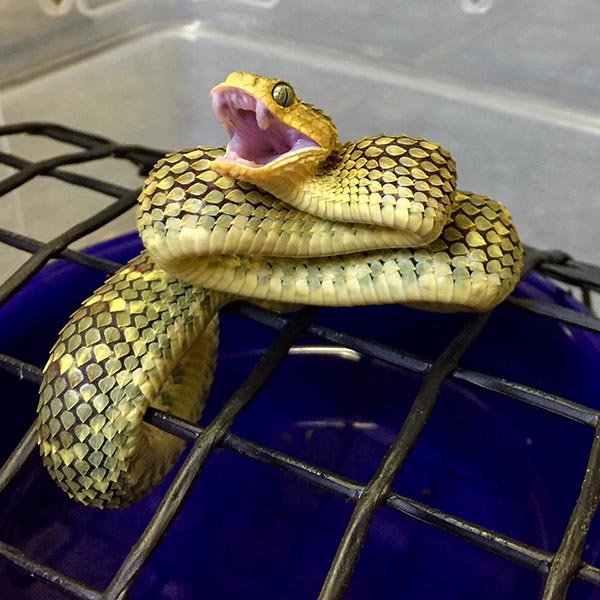 The Variable Bush Viper, also referred to as the Squam, is a small, attractive arboreal viper from Central Africa. Their distribution extends from Ivory Coast and Ghana, eastward through southern Nigeria to Cameroon, southern Central African Republic, Gabon, Congo, DR Congo, northern Angola, Uganda, Tanzania and western Kenya. In nature these snakes occur in low, dense vegetation in tropical rainforests throughout these locations.

As the name suggests, the Variable Bush Viper’s colours are extremely variable. This is somewhat dependant on locality and often they undergo a drastic colour change from juvenile to adulthood; born as a plain green snake it may later become a blue snake. This is what makes these vipers so fascinating to work with. The body colour is quite variable, ranging from uniform green to red, yellow, blue, black, orange, or any combination of these colours. This species may change colouration throughout life from birth to adulthood. For example, babies that are born green can change into adults of vibrant colours, or the exact opposite may happen. The scales are heavily keeled, which leads to a somewhat hairy appearance. Unlike A. ceratophora, A. squamigera do not rasp their scales together to make a “hissing” sound. Tail tips are usually yellow or cream coloured and are used for caudal luring by young animals. The tail is also prehensile and is used for grasping, and sometimes hanging from, branches to ambush unsuspecting prey.

These snakes seldom grow to more than around 70cm and males are noticeably smaller than females. The keeled scales and dragon-like appearance, as well as the prehensile tail, will often leave a venomous keeper stunned at the beauty that this snake displays. Having said this, Squams are cheeky little buggers; they are also faster than they appear, and utmost caution should be taken when keeping these little goblins! 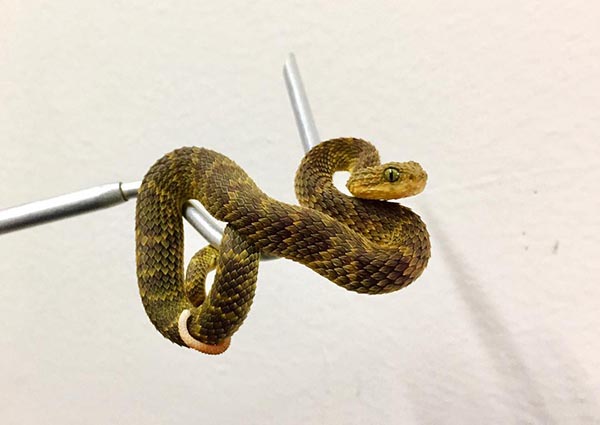 Variable Bush Vipers are one of the few species of arboreal vipers that I believe really thrive in captivity. The only problem you should have with regards to feeding Squams is overfeeding or obesity, as they love to eat! Squams are nocturnal ambush predators. Their natural diet consists of frogs, lizards, birds, small rodents and sometimes they have been known to be cannibalistic; however, they readily eat a diet of exclusively rodents in captivity. One needs to be careful to not over feed and I recommend that a prey item be offered once every other week.

Neonate Squams are one of the easiest of the arboreal vipers to get started. They often readily take full pinkie mice, sometimes if the neonates are very small you may need to offer pinkie hind quarters or heads. Tease feeding is often the only way to get Squams started. Gently tapping the prey item on the snake’s tail and head will trigger it to bite; sometimes the snake will hold on to the prey item and promptly begin to swallow, sometimes the snake will drop the prey item – all you need to do is persistently continue to offer the meal until the snake holds on and gets it down. If the snake continues to drop the prey item with no attempt at swallowing at all you may need to offer a smaller prey item/pinky part.

Squams should be housed separately until the stage that you want to pair them for breeding. Keepers from around the world keep these snakes in various ways, some in attractive naturalistic terrariums with live plants, natural substrates, artificial lighting and basking spots. If the correct humidity and temperature gradient is maintained these will work well, however, I have personally found that this is not always possible and a cold or wet draft will cause issues such as respiratory infections and more often than not be fatal to the snake.

I have had great success keeping Squams housed in 11l Addis tubs in a racking system (juveniles) and 26l Addis tubs in a racking system (adults). I find that these tubs hold humidity well, as well as a perfect temperature gradient. The hot side of the rack for Squams should be at around 29-30°C with the cool side at around 22-25°C. This is just a guideline and as long as the snake has adequate perching throughout the cage with a warmer side and a cooler side you should not have any issues.

The tub layout is basic and consists of a sterile substrate – paper towel/newspaper are my favourites but Coco Husk can also be used, a plastic mesh folded across the entire tub (so that the snake can have a choice of where it wants to be whilst perching), some plastic plants for cover and a large water bowl to maintain humidity. I believe that hygiene is key when housing any snake and water should be changed frequently. A disinfectant such as F10 should be used to disinfect the tub, water bowl, plants and perches when a change of substrate is necessary.

One of the big mistakes that I made when I started keeping arboreal vipers was misting the snakes with a spray bottle. A wet area that does not dry within a few hours, combined with stagnant air, quickly becomes a breeding ground for bacteria, and will in turn with a slight fluctuation in temperature cause some nasty bacterial infections – most of the arboreal vipers that we work with will drink from a water bowl so there is no need to spray. The only time you may need to spray will be with newly born juveniles, but they will quickly learn to drink from the water bowl.

Babies and juveniles can be sexed by comparing their tails, though several snakes of the same size may be needed for comparison. The males’ tails will generally be longer and taper slowly past the vent, while the females’ will taper more dramatically. Probing does work (but may be dangerous to babies), while I have heard that “popping” of the tails does not work.

I believe that breeding this species is dependent on three conditions: temperature, humidity, and pressure. In the wild these snakes do not experience seasonal changes like we experience in many other parts of the world, but instead experience wet and dry seasons. They would normally breed at the onset of the wet season (October) when pressure changes occur, temperatures drop, and the humidity rises. By manipulating these conditions you can get this species to breed when you want them to.

Copulations are most likely to occur when the climate is closest to mimicking a wet season: fall and spring. I keep the cages drier and warmer for our summer and wintertime, but open the windows in my snake room and mist the cages more often during the fall and spring. During these wetter, cooler periods is when breeding should occur.

Females will begin to feed ravenously in preparation of mating and when I am satisfied with a snake’s health and size, I introduce a male into her cage. Introduction of the sexes usually takes place in May. The cooling period should be for around two months, day temps at around 27°C and night temps to around 20°C, during this period you should introduce the female to the male for 3-4 day intervals and on the separation days small meals should be offered mainly to the female as males tend to lose their appetite. Mating may be observed but breeders have bred them without seeing them mate.

During cooling mist the cage once or twice daily. Courting pairs will spend considerable time together and may be witnessed sleeping on top of each other. Copulation with A. squamigera may occur more than once and may be witnessed by the observant keeper. Care must be taken, however, as the copulating pairs may be easily disturbed and upset. Although I had an A. chlorechis litter born this year and I believe that I have another gravid female, I have never witnessed any courting or copulation with this species. Even if copulation is not witnessed, pairs should be separated after a few weeks. I have witnessed a gravid A. squamigera kill her mate and have heard of other similar experiences by other keepers. I have not witnessed any aggressive behaviour between the sexes of A. chlorechis, but I prefer to keep it that way and I separate them anyway.

Gravid females will continue to feed ravenously for several weeks after copulation, but then usually abruptly go off of food entirely. Meals should still be offered occasionally, but most will be refused. I offer heat with spotlights and gravid females may be observed basking regularly. Both species are viviparous and the live babies are born after six to seven months. Babies are tiny and will usually eat pinky parts (heads or hams) until they are large enough to eat whole pinks.

Squams, like most vipers, are live bearers. They should reach sexual maturity at around 3 years old, after a gestation period of around 2 to 3 months females will drop up to 9 neonates.

Little is known about the venom of Atheris species. There have been some deaths related to Variable Bush Viper bites and some with severe haematological symptoms, while some bites have only produced local swelling and pain. There is also no antivenom manufactured for Atheris bites, however in some severe cases Echis sp polyvalent has been used successfully with Squam bites.

As with most venomous bites, the result varies from person to person. The idea is obviously to avoid a bite from any venomous snake – always use the correct handling equipment. For arboreal vipers you should always have a hook stick or two, as well as a good set of feeding tweezers with a bit of length to them. The best advice I can give when dealing with any venomous snakes is to have the right tools, full concentration at all times, and DO NOT TAKE ANY CHANCES!