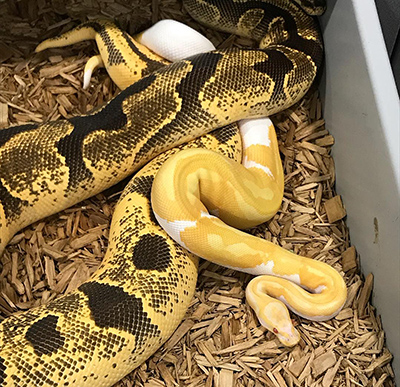 Posted at 08:14h in Uncategorized by editor 0 Comments
2 Likes

How to Know When Your Animals Are Ready To Safely Breed

There is no cookie cutter layout on what size the animals need to be to breed safely. There is always exceptions so it’s difficult to give an exact weight or age. We go by a combination of age and weight. As a rule of thumb most females will breed in their third winter if they are over 1,500grams. It is possible to see a female hit 1,500g in their second winter but at this point we would let their age come into play when making a decision. If the female is in their second winter we really like to see them above 1,800g to start pairing them. At the same time, a female in her fourth year or older may be 1,500g after laying but still be way too small to breed because she may need to be over 2,000g to have the body weight needed to lay a healthy clutch. This is why it’s pretty hard to go just off a weight. With both males and females its very important to take a look at the bigger picture and factor in age, weight and body structure. You don’t want an animal that is fat from power feeding, you want the animal to be nice and stocky. You want the snake to be firm to the touch, where they are slow grown versus fat and obese from the keeper trying to grow them as fast as possible. Remember it’s not a race to pass 1,500g to breed. All animals are different and they will achieve a healthy, breedable body weight when they are ready.

Over the years, we have learned it’s not worth pushing females long term. For example, one year we had 2 sisters both about 1600 grams in their 2nd winter and decided to try and breed them both.  One of them laid a small clutch of 4 eggs and lost a lot of weight after doing so while the other female kept feeding and did not lay at all.  When the 3rd winter came around the female that laid the year prior had regained the weight she lost before laying and then some but was still under 2000 grams while the sister that did not lay in her 2nd winter but kept feeding was pushing 3000 grams.  When the 3rd season came around again both girls had the weight to breed but the from that laid in her 2nd winter did not go and the female that stayed on feed and did not lay her 2nd winter went on to drop a nice 10 egg clutch for her first clutch in her 3rd winter.  So now when you step back and look at the bigger picture as a whole we have 2 sibling females that were the same size up until we decided to breed them their 2nd winter.  The one that gave us eggs early we are going into the 4th winter with her having given us a total of 4 eggs while the sibling that took longer has given us 10 eggs.  When you look at it like that sure we didn’t get any eggs in the 2nd winter from the female that took longer but in the long run letting her continue to feed and grow has ended up giving us more eggs than the one that started early.  At this point we don’t even try to push young females because I know by letting them stay on feed and grow larger before pairing them I will end up with the same amount of eggs or more in the long run than if I had pushed her and bred her early.  So to us, slow and steady wins the race!

It is possible to get a male to breed his first season. We aim to see a male at least 600g AND STILL FEEDING before trying to breed a young male in his first season. It’s not uncommon for males to go off feed completely or to slow down feeding during breeding season. Which is why we aim to see at least 600g and still on feeding before we start pairing a male in his first winter. It is possible to breed a male that is both younger and smaller. The earlier we have ever had a male breeding was about 400g and about 4months old, but we don’t really recommend trying this as it’s better to have a healthy weight on a snake so that way if he goes off feed during breeding he has enough body weight and fat built up that he doesn’t drop to an unsafe weight. Ideally we prefer males to be in their second winter and to be about 800g or more. The key is finding the balance because an underweight male might not have the body weight to be able to safely go off feed and complete the breeding season. At the same time, a male that has been overfed and is too fat will become lazy and have no interest in breeding.

With both males and females, as breeders we always have to keep the health of the animal in mind. Never try to breed a male or female that does not have the body weight. You have to keep an eye on the male and be ready and willing to pull him from breeding rotation if he goes off feed and starts getting thin. It’s never worth risking the health of your animals to push them too hard.  There is ALWAYS next season IF you put the safety and well being of your animals first!

Ok now that you have decided that you have a male and female or females that have the age and safe body weight to breed it’s time to do some pairings!

The number one thing to keep in mind is that ball python breeding season is from Jan 1 – Dec 31…. No that is not a typo, it is possible to get eggs from ball pythons year round.  The majority of females will lay from October – December for us but there are ALWAYS females that lay before and after this time frame.  We are always on our animals time not the other way around so even though we have a schedule for when we breed the collection as a whole we always have our eyes on our animals to be sure the ones that lay early or late are paired when they need it.

We do not cool our ambient room temp or our hot spots on adults at all.  Year round our ambient room temp is about 25 and our adult ball pythons are given hot spots of about 31°C – 32°C.  This lets the females decide when they need to cool themselves and as we go into the breeding season we see more and more females cool seeking and wrapping the water bowls and sitting on the cool side of the tubs.

We usually start pairing late April and try to have the first lock on all of our females by July.  Once we start pairing we aim for every girl to have a lock on them at least once a month until they ovulate. If not using an ultrasound we usually aim for each male to breed 4-6 females.  This allows us to get 1 lock a month per female while still giving the male plenty of down time to rest.  If you are using an ultrasound it is possible to safely breed more females per male but you have to stay on a schedule of regularly ultra-sounding your females every 3 weeks or so to be sure the girls that need it are getting bred.  When using a machine we still aim to get the first lock on the female around late July.  We do not pair again until the female hits 15mm follicles or 2 months has gone by, whichever comes first.  Then we aim to get 2 more locks on them when they are around 25mm-30mm.  We usually do not bother with using the ultrasound other than confirming that a female is starting to absorb her follicles and knowing that although we can feel follicles when palpating there is no point in wasting the males energy breeding her any more as she has started to absorb them and will not go this season.

We always pair our animals by taking the male and putting him in the females enclosure.  Some males will lock and get the job done quickly and part ways while others will lock for 24-hours and there is no way you will miss it if you are checking on them.  We try to check for locks a few times a day so we can record the locks on the animals breeding tag and document that she was bred even if the male got the job done quickly.  If we do not have the time to check for locks a few times that day then we just do not pair that day because if a male locks with that female we want to be able to confirm the lock and document it so we can focus his energy on breeding other females in his group that need his attention more.  Once we have witnessed copulation and see the snakes are unlocked we will pull the male and offer him a meal and give him several days of rest before trying to breed another female in his breeding group.  If we put a pair together and do not see a lock or any signs of courting on the first day we will put that male with another female in his breeding group.  If the next day he has not bred or shown any interest in that 2nd female we will just pull him and offer a meal and give him a few days before trying again even though he did not breed.

When a male and female are locked up it is VERY hard to miss.  The males tail will be coiled under the females tail and look similar to if crossed your fingers.

We will continue this breeding cycle of aiming for 1 lock on each female until they ovulate or absorb follicles.

Don’t forget to check out our cool Ultimate Exotics merch!

For US, European and other International customers check out this link below: https://teespring.com/stores/ultimate-exotics-reptiles

For our South African customers check out this link below: https://ultimateexotics.co.za/product-category/other-products/ultimate-exotics-t-shirt/