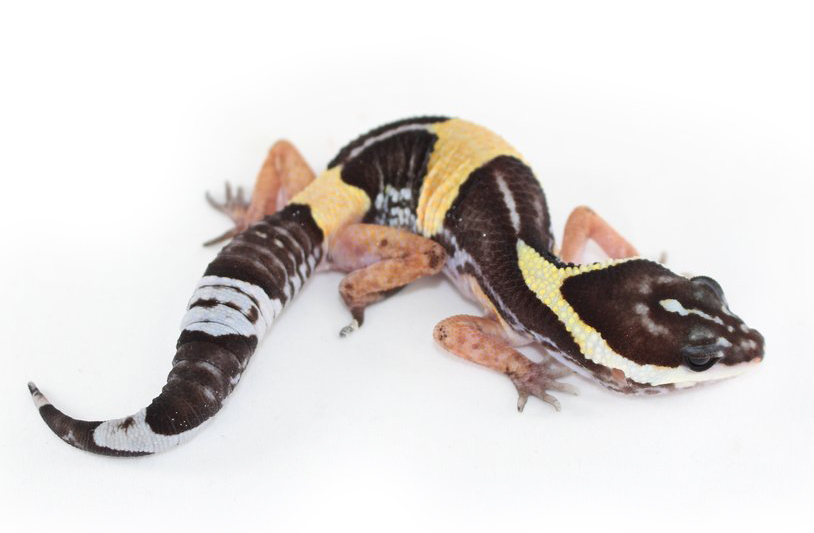 Posted at 15:01h in Uncategorized by editor 0 Comments
0 Likes

The East Indian Leopard Gecko (Eublepharis hardwickii), also known commonly as Hardwicke’s gecko, is a species of gecko in the family Eublepharidae. This species is endemic to India and Bangladesh. This is the only Leopard Gecko species within the genus that inhabits moist forested areas. It’s colouration also differs dramatically from all other Leopard Gecko species. Their colours consist of earthy browns, yellows, oranges and beige. These colours help them with camouflage as they blend into their natural habitat on the forest floor. Their colouration is actually more similar to that of African Fat Tailed Geckos which occur in West Africa. Another interesting feature is their heard pattern and colouration. Each gecko has a unique pattern on their head like that of a fingerprint. This pattern will develop as juveniles and remain unaltered for the gecko’s entire life.

When I first saw pictures of these geckos the first thing that came to mind was that they looked like a hybrid between an African Fat Tailed Gecko and a Leopard Gecko. They reach similar sizes to that of a Leopard Gecko reaching around 20 to 23 cm in length.

Biology Notes from India
Singh (1984) writes that the species E. hardwickii was common (in the 1970s) at Tikerpada, a village at 600m elevation on the banks of the Mahanadi river in the Satkoshia Gorge Sanctuary of Odisha. In the night, during summer and rains, these may be found on the forest roads or on open areas, and in the day several individuals were found underneath rocks and stones. He collected specimens from the Satkoshia Gorge and bred these in captivity at Tikarpada. In captivity E. hardwickii was found to be timid, allowing to be lifted by hand and accepting a variety of insects as diet. Prey were detected by their movements. At least one definite case of cannibalism was recorded in captivity – mode of capture was from the neck and during swallowing the victim lay with its ventral side up. E. hardwickii never took water from a container in captivity; instead, they used to wait for spray of water to lick off drops falling on their head or sticking to the surfaces on the surroundings (captive bred geckos will drink out of a water dish). The tongue is pinkish red, flat, thin and able to extend over to the eyes and head. One or two leathery eggs (approx. 20 x 10 mm) are laid and buried in soil. Eublepharis hardwickii is called the Kalakuta Sapa in Odisha(Oriya: Kalakuta = one which brings the message of death, and Sapa = snake). The local name originates from belief that these geckoes are highly poisonous, can climb trees (which these can) and after a bite the higher they climb the effect of the poison gets gradually intensified. The gecko makes a shrill vibrating noise when surprised. 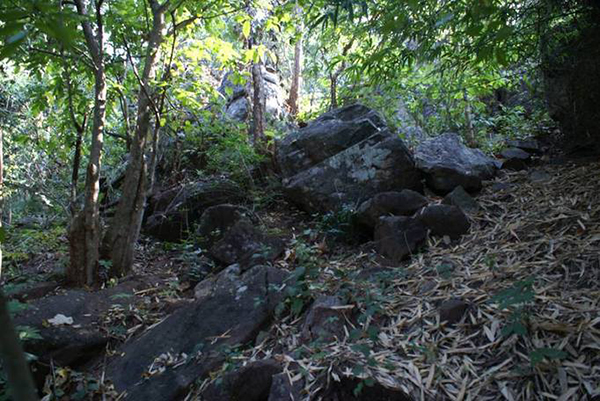 There is still very little information on the care and breeding of this species and it is still fairly rare in the reptile hobby around the world. With that being said they seem to be being bred more commonly and hopefully we will start seeing more of them becoming easily available.

Housing
As this species inhabits moist forest floors it is important that they are kept fairly cool and humid. I would recommend keeping them in a similar setup to that of an African Fat Tailed Gecko except allot cooler, the hot spot should be kept at 27 degrees Celsius, make sure it doesn’t get hotter than 28 degrees Celsius. They should have allot of hiding spaces in their enclosure and a large moist hide with damp peat moss in it on the warm side of the enclosure. There are quite a few keepers that keep them on peat but I would personally recommend using paper towel as a substrate and then use large humid hides with peat moss in them. With that being said they can also be kept on loose substrate such as bark chips or soil. It should be treated with more caution for younger geckos, as it is easier for them to get impacted as they are smaller. They should not be kept on sand as they will be at risk of impaction, which could result in death. It is unnatural and unsafe.

While not arboreal, East Indian Leopard Geckos climb frequently in the wild. Decoration to enable climbing can be provided if they are not being kept in a racking system. A planted bioactive vivarium with naturalistic decor can also work very well.

They should be kept in a vivarium between 40% and 60% humidity (based off of discussion with owners, and looking at the weather forecast for Tikarpada, an Indian village where they are native to).

E. Hardwickii may be cohabited under certain conditions-
” Males should NEVER be cohabited – they are territorial and will fight, and one will die.
” A male and female should not ideally be kept together, as one may get bullied and die/become underweight, and they will both be stressed from constantly breeding.
” Females may be kept together, but with sufficient space and hides (Try and make sure there is one hide for each gecko). Behaviour must be closely monitored for bullying as one may be bullied. Behaviour can change very quickly.
” Hatchlings/juveniles being kept together should be treated with caution – cannibalism has been observed in young geckos.
” Only geckos of similar size should be cohabited as it reduces chances of bullying.

Feeding
Hardwickii are insectivorous, but owners have found that some may not eat mealworms. Gut loaded, appropriately sized crickets, locusts or small dubia roaches should be fed. Every third feedings you can dust insects with a calcium and vitamin supplement which contains vitamin D3.

They may also readily accept silkworms, waxworms or pinkie mice, but these food items should only be given as a supplement as they are high in fat content. Geckos that are under four months should be fed about five crickets every day and juveniles and adults should be fed about nine crickets or mealworms (if they eat them) three times a week. Crickets should be appropriately sized for the gecko and as a general guideline we feed ½ sized crickets for hatchlings that are less than six weeks old, and then feed 2/3 sized crickets right up to and including adulthood. Crickets can be put in the enclosure to roam but should be removed if your gecko does not eat them within 24 hours. Mealworms can be left in a shallow dish.
Insects should be gut loaded with either a commercial gut load product or a mix of either baby cereal, fish flakes or high grade dry dog/cat food as well as leafy greens. Gut loading ultimately means that the prey insect is acting as a vehicle to pass on beneficial nutrients to your gecko.

Water
Fresh water must be available at all times and can be provided by utilizing a shallow water bowl. 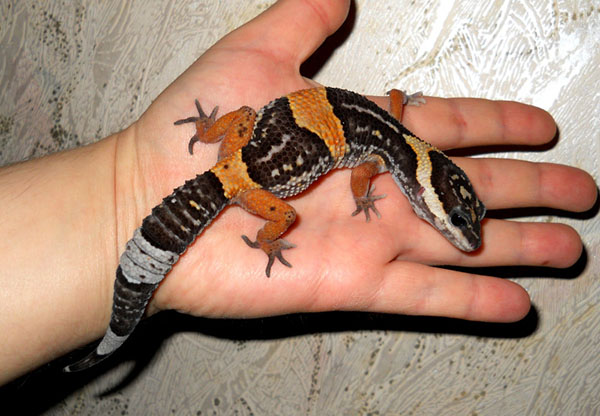 They reach similar sizes to that of a Leopard Gecko reaching around 20 to 23 cm in length.

Sexing
Sexing Hardwickii can be a bit difficult. The method is similar to that of a Leopard Gecko but it doesn’t seem to be as obvious especially with juvenile animals. You should examine the underside of the gecko, just below the vent and if you see enlarged hemipenal bulges you have a male. Females show no enlargement in this area. The second method involves locating a male’s preanal pores, which are located in a V- shaped pattern just above the vent. Although females will exhibit similar pores they are not as pronounced and can sometimes be unnoticeable at first glance whereas the males are very obvious.

Breeding
East Indian Leopard Gecko should be put through a cooling or cycling period to help stimulate the breeding cycle. Before geckos enter the cooling period it is crucial to completely empty their digestive tracks. During cycling temperatures are lowered to around 16 to 22 degrees Celcius. Only water is made available during this period, which should range between four to eight weeks.

Once the cycling period is over temperatures should be brought back to normal levels and a regular feeding program. As soon as the geckos have acclimatized to the regular temperatures the males can be introduced to the females. A general rule of thumb is that each male can successfully breed up to six females. Within six weeks the females will start becoming larger and a look at their underside will show the outline of the developing ovum. The females will bury their eggs in their peat hides. Make sure the peat remains slightly damp at all times.

One female can lay up to five clutches a season with each clutch consisting of one to two eggs. Once you can see a female has laid the eggs should be removed daily from the nesting box and placed into an incubator. The eggs should carefully be placed in a container with a few small holes in the lid on top of a bed of moist vermiculite. East Indian Leopard Geckos can be temperature sexed with males incubating at 32 degrees Celsius, females at 28 degrees Celsius and mixed sexes in the middle of the two temperatures. During incubation containers can be opened once a week to allow fresh air and to remove condensation that has formed on the lid. Finally, it is important to separate the males and females at the end of each breeding season so that the females are given a chance to recuperate.

Hatchlings
When the babies emerge from the egg they quickly become active and measure about one quarter of the size of an adult. Babies should immediately be moved to a hatchling enclosure, which is essentially a smaller version of the adult’s enclosure. Housing hatchling individually in a shoe box sized containers is an effective way to help reduce stress through their transition period. Initially only water should be offered and enclosures lined with moist paper towel. After a hatchlings first shed is complete, which is around day 10, you can offer baby pinhead crickets and switch to a paper substrate.

When the babies emerge from the egg they quickly become active and measure about one quarter of the size of an adult.

Handling and Temperament
East Indian Leopard Geckos can be shy, but can also be open to being handled and can become tame with regular contact. It is important to always take great care when handling a gecko and it is important to never hold or constrain a gecko by its tail. The tail of these geckos will detach as part of a defense mechanism called caudal autotomy. If your gecko does drop its tail, it will grow a regenerated tail, but it will have a different appearance than its original tail and it’s an unnecessary stress you want to try and avoid.

Conclusion
I really love this species of gecko and I think it is an exciting and unique addition for any reptile enthusiasts who is interested in gecko species. It has a unique look to it and it is truly beautiful in its own unique way. They are also easy to handle calm geckos that are great to work with. I hope to see these becoming more commonly available in the near future and hopefully we will see them more readily available along-side the more common Leopard Geckos and African Fat Tailed Geckos.

Don’t forget to check out our cool Ultimate Exotics merch!

For US, European and other International customers check out this link below: https://teespring.com/stores/ultimate-exotics-reptiles

For our South African customers check out this link below: https://ultimateexotics.co.za/product-category/other-products/ultimate-exotics-t-shirt/